English Wikipedia has an article on:
41 equal temperament

The 41 equal divisions of the octave (41edo), or 41(-tone) equal temperament (41tet, 41et) when viewed from a regular temperament perspective, is the tuning system derived by dividing the octave into 41 equally-sized steps. Each step is about 29.3 cents, an interval close in size to 64/63, the septimal comma.

41edo can be seen as a tuning of the garibaldi temperament[1][2], the magic temperament and the superkleismic (26&41) temperament. It is the second smallest equal division (after 29edo) whose perfect fifth is closer to just intonation than that of 12edo, and is the seventh zeta integral edo after 31; it is not, however, a zeta gap edo. This has to do with the fact that it can deal with the 11-limit fairly well, and the 13-limit perhaps close enough for government work, though its 13/10 is 14 cents sharp. Various 13-limit magic extensions are supported by 41: 13-limit magic, and less successfully necromancy and witchcraft, all merge into one in 41edo tuning. The 41f val provides a superb tuning for sorcery, giving a less-complex version of the 13-limit, and the 41ef val likewise works well for telepathy; telepathy and sorcery merging into one however not in 41edo but in 22edo.

41et forms the foundation of the H-System, which uses the scale degrees of 41et as the basic 13-limit intervals requiring fine tuning +/- 1 average JND from the 41et circle in 205edo. 41et is also used by the Kite Guitar, see below in #Instruments.

All 41edo chords can be named using ups and downs. An up, down or mid immediately after the chord root affects the 3rd, 6th, 7th, and/or the 11th (every other note of a stacked-3rds chord 6-1-3-5-7-9-11-13). Alterations are always enclosed in parentheses, additions never are. Here are the zo, gu, ilo, yo and ru triads:

Interval classes could also be named by analogy. The natural, colorless, or gray interval classes are the Pythagorean ones (which show up in the standard diatonic scale), while "red" and "blue" versions are one step higher or lower. Gray thirds, sixths, and sevenths are usually more dissonant than their colorful counterparts, but the reverse is true of fourths and fifths.

The step size of 41edo is small enough that the smallest interval (the "red/blue unison", seventh-tone, comma, diesis or whatever you want to call it) is actually fairly consonant with most timbres; it resembles a "noticeably out of tune unison" rather than a minor second, and has its own distinct character and appeal.

If "red" is replaced by "up", "blue" by "down", and "neutral" by "mid", and if "gray" is omitted, this notation becomes essentially the same as ups and downs notation. The only difference is the use of minor tritone and major tritone.

From the appendix to The Sagittal Songbook by Jacob A. Barton, a diagram of how to notate 41-EDO in the Revo flavor of Sagittal:

The following table shows how 15-odd-limit intervals are represented in 41edo. Prime harmonics are in bold.

Whereas 12edo has a circle of twelve 5ths, 41edo has a spiral of twelve 5ths (since 24\41 is on the 7\12 kite in the scale tree). This spiral of 5th shows 41edo in a 12edo-friendly format. Excellent for introducing 41edo to musicians unfamiliar with microtonal music. There are 12 "-ish" categories, where "-ish" means ±1 edostep. The 6 mid intervals are uncategorized, since they are all so far from 12edo. The two innermost and two outermost intervals on the spiral are duplicates. 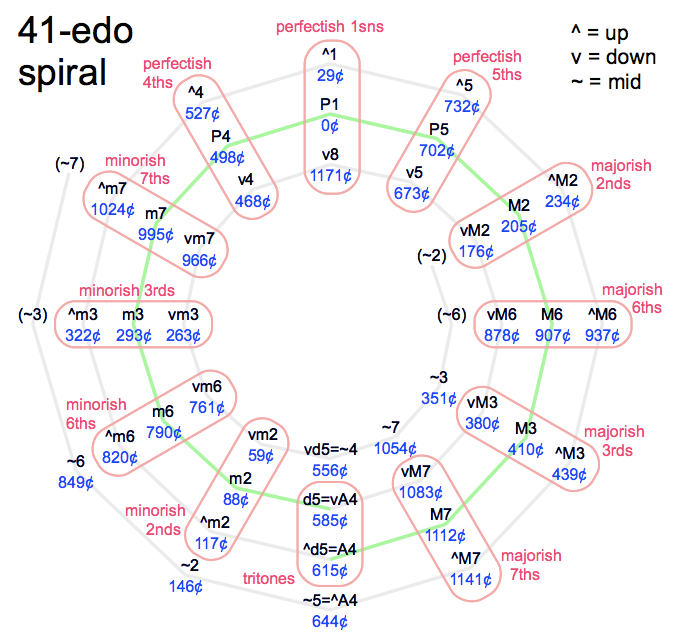 The same spiral, but with notes not intervals: 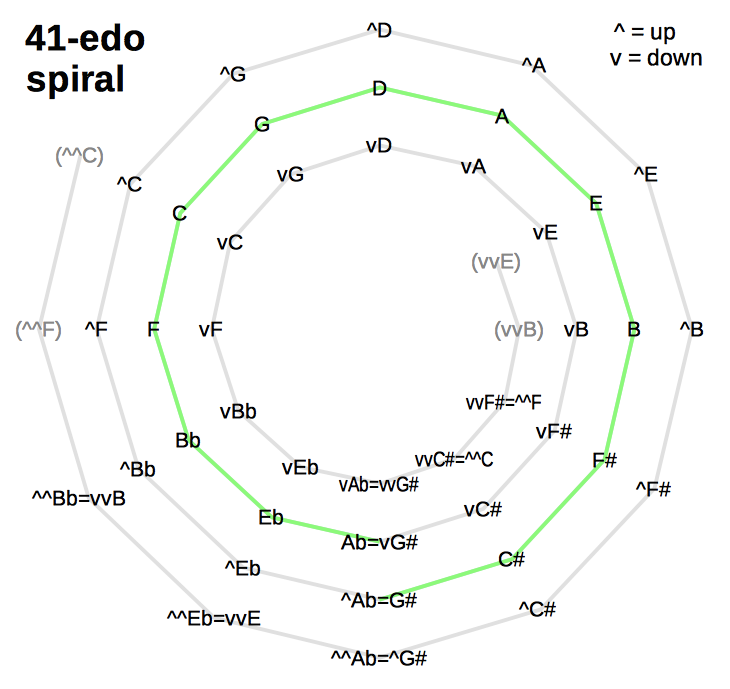 A list of 41edo modes (MOS and others). See also Kite Guitar Scales and Kite Giedraitis's Categorizations of 41edo Scales.

41edo is the first edo to do some justice to Mode 8 of the harmonic series, which Dante Rosati calls the "Diatonic Harmonic Series Scale," consisting of overtones 8 through 16 (sometimes made to repeat at the octave).

While each overtone of Mode 8 is approximated within a reasonable degree of accuracy, the steps between the intervals are not uniquely represented. (41edo is, after all, a temperament.)

Taking every third degree of 41edo produces a scale extremely close to 88cET or 88-cent equal temperament (or the 8th root of 3:2). Likewise, taking every fifth degree produces a scale very close to the equal-tempered Bohlen-Pierce Scale (or the 13th root of 3). See Relationship between Bohlen-Pierce and octave-ful temperaments, and see this chart: 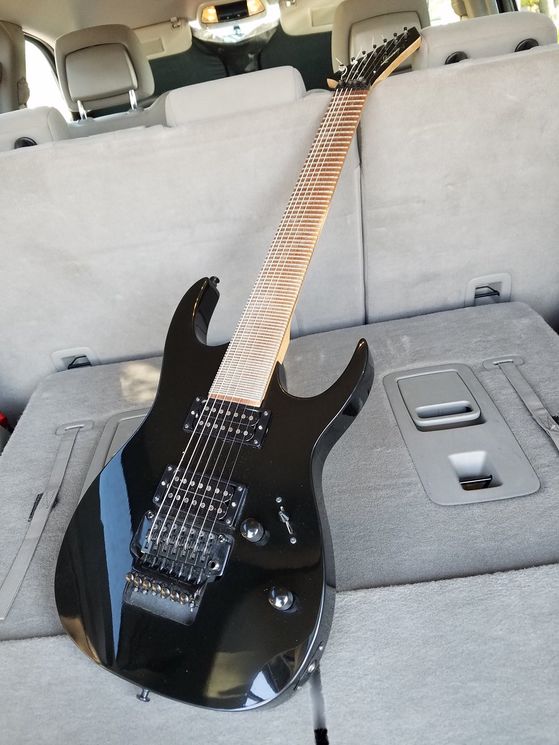 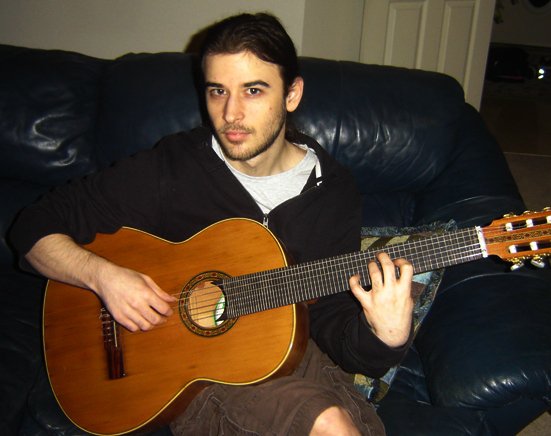 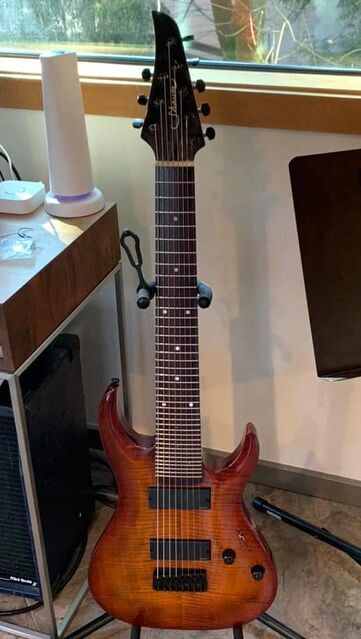 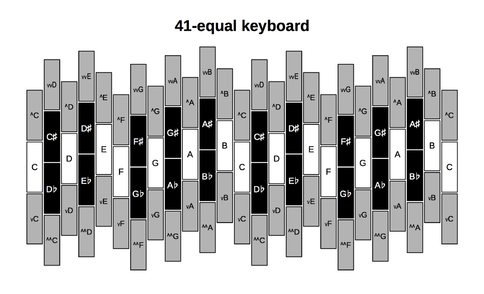 41edo as a Universal Tuning

41's claim to fame as a "universal tuning" is the fact that it approximates scales present in many important world music traditions, and thus is good for both combining and exploring cultural playstyles.

Due to 41edo's extremely accurate perfect fifth, it makes a good tuning for schismatic temperament, which is a good approximation of the standard 12edo scale, and when arranged as a Bbb-D gamut, approximates the 12 note Pythagorean tuning known as Kirnberger I. This extends the Ptolemy Diatonic Scale (7 6 4 7 6 7 4), which 41 approximates excellently, by completing the circle of fifths with pure 3/2s. By using this system and occasionally substituting in alternate major seconds and sixths when necessary, it becomes quite reminiscent of 12edo harmony. Additionally, the Pythagorean Pentatonic scale can be used for melodies overtop due to the strong quartal nature of the scale. The Pythagorean diatonic scale exists as an option as well, but use may be limited unless Gentle triads are ideal.

While the Hemif[7] scale itself and MODMOSes related to it give the middle eastern sound well, 41 has other interesting properties that make it an ideal system for Arabic and Turkish music. It is considered a "Level 2 EDO" due to the fact that it has neutral seconds and thirds as well as submajor and supraminor ones added to a Pythagorean skeleton, with small semitones as minor seconds and major whole tones as major seconds. The submajor third is great for Turkish Rast as it is sharp enough to sound close to a 5/4, while the neutral third exists as half of a 3/2 and works well for Arabic Rast and some Persian scales. Additionally, a large apotome exists for the Hicaz maqam.

Gamelan music is mainly based on two scales, the older Slendro and newer Pelog, though these scales are expanded on extensively through octave stretching, extensions and combination of the scales, and more. Slendro is excellently approximated by the 8\41 generator. Pelog is approximated quite well also, this time by mavila temperament, using the "grave" fifth of 41 as the generator (23\41).

Classical Thai music, which often is played in 7edo or a system resembling it, is well represented in 41, due to the tetracot temperament that splits the perfect fifth into 4 equal parts, each about the size of a 7edo second.

Carnatic music, which is normally based on a 22-note unequal scale, has found some use from 22edo as a good approximation, but 41 offers another option with Magic[22], which not only represents 22edo closely, but preserves accurate perfects fifths and the unequal quality of a more typical carnatic scale.

Japanese classical music known as Gagaku is largely built around winds, strings, and percussion, and the melodies, like many Asian cultures, are built around Pythagorean pentatonic scales, alongside chromaticism with narrow semitones, which are well represented by Pythagorean limmas.

Due to its pure sounding major thirds and approximations of standard western harmony, 41 naturally is good for jazz and blues music, though a great strength of this system as opposed to many others is its excellent harmonic seventh, alongside MOS scales that supply them, Miracle in particular.

Coltrane changes can be represented with two Pythagorean major thirds and a pental one, or an MOS like Magic, whose circles of major thirds give options for rotating major and minor triads within one scale.

Blue notes, rather than being considered inflections, can be notated as accidentals instead, such as the "blue third" which is represented by a neutral third, or any number of septimal intervals that sound great in a blues context.

Georgian Polyphonic singing can be done in a 41edo context due to its excellent approximations of prime harmonics and neutral third, as well as Pythagorean seconds and sevenths. Asian musical traditions built around pentatonic scales can use both Pythagorean and Barbad[5].