Color notation was mostly developed by Kite Giedraitis. This is a brief summary. For a full explanation, see "Alternative Tunings: Theory, Notation and Practice". For a great webapp that converts to/from ratios, monzos and color notation, see Xen-calc It also does ups and downs.

Color notation has many features other microtonal notations lack:

Colorspeak is designed to be an international language, a sort of microtonal Esperanto easily learned and spoken no matter what one's native language is. Almost every term in colorspeak is one syllable ending with a vowel. The five basic vowels are pronounced ah-eh-ee-oh-oo as in Spanish or Italian.

The colors make a red-yellow-green-blue rainbow, with warm/cool colors indicating sharp/flat intervals. The rainbow of 3rds runs 9/7 - 5/4 - 6/5 - 7/6. Colors are abbreviated as w, y, g, z and r. Use z (azure or Spanish/Portuguese azul) not b (blue), because b already means flat. Mnemonic: Z looks like 7 with an extra line on the bottom.

A color and a degree indicates a ratio, and vice versa. Every ratio has a spoken name and a written name. For 3/2, they are wa 5th and w5. Colors and degrees always add up predictably: z3 + g3 = zg5 = zogu 5th. Zogu not guzo, higher primes always come first. Opposite colors cancel: y3 + g3 = w5.

The JI lattice consists of many rows, each one a chain of 5ths. Each row has its own color, and each color has its own row.

The next table lists all the intervals in this lattice. See the Gallery of Just Intervals for many more examples.

Yo and ru intervals tend to be major, and gu and zo ones tend to be minor. But interval quality is redundant (if a third is yo, it must be major), it's not unique (there are other major thirds available), and quality isn't used with color names (see #Color Names for Higher Primes below for why). Intervals on the far right or far left of the lattice are called not augmented and diminished, but large and small, written as L and s, and abbreviated as la and sa. La and sa can always be distinguished from solfege's La and saregam's Sa by context. Central, the default, means neither large nor small. This lattice shows the boundaries between the large, small and central zones:

Colors using only one prime above 3 are called primary colors. Thus gu and yoyo are primary and ruyo is non-primary.

Compound, abbreviated co- or c, is a conventional music theory term that means widened by an octave. 15/4 is a compound yo 7th = coyo 7th = cy7. 5/1 is a double-compound yo 3rd = cocoyo 3rd = ccy3. 9/1 is a tricowa 2nd = c3w2. More examples in the Gallery of just intervals. Mnemonic: co- as in co-pilot means auxiliary, thus a 9th is a co-2nd. See #Prime Subgroup Names below for another mnemonic.

Notes are named zEb, yyG#, etc. spoken as "zo E flat" and "yoyo G sharp". Notes are never large or small, only intervals are. Uncolored notes default to wa. The relative-notation lattice above can be mentally superimposed on this absolute-notation lattice to name every note and interval. For example, D + y3 = yF#, and from yE to ryF# = r2. 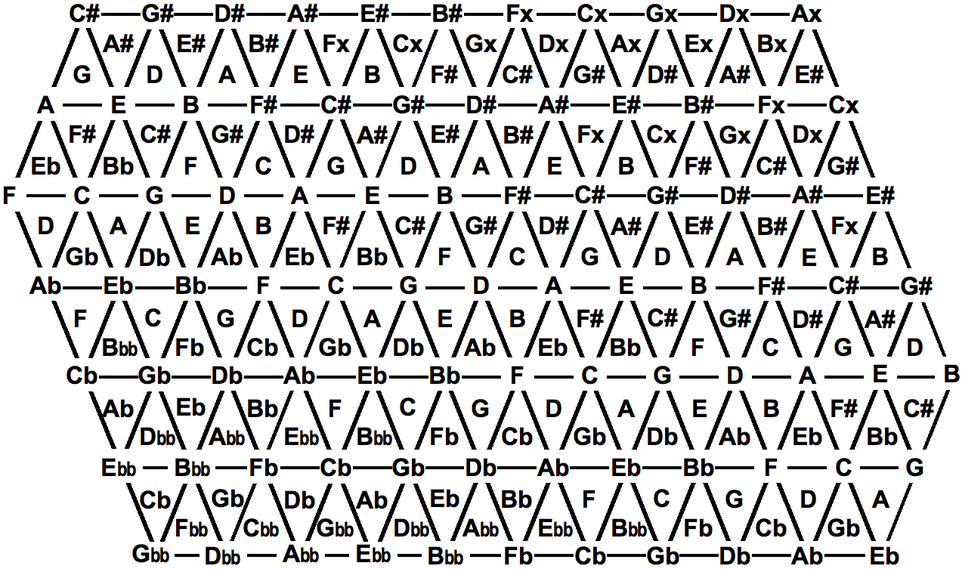 Prime 2 (even more colorless than wa) is clear, abbreviated ca, and yaza noca = 3.5.7 = Bohlen-Pierce. 2-limit intervals like 2/1 are called wa not clear, for simplicity. Nowaca means without 2 or 3, thus 5.7.11 is yazala nowaca. Clear/ca is only ever used in the terms noca and nowaca, and in certain theoretical discussions. However, an additional mnemonic for "co-" (compound, widened by an octave) is "clear-over", in the sense that the ratio's numerator is multiplied by 2.

Colors for primes greater than 7 are named after the number itself, using the prefix i- for disambiguation as needed:

On the score and in note names, the 1o accidental either raises by 33/32 or lowers by 729/704. The meaning will usually be clear from context, however it's safer to write at the top of the page either "1o4 = P4" or "1o4 = A4". Likewise, 3o6 should be noted as either m6 or M6. While the note 11/8 above C can be written two ways, either as 1oF or as 1oF#, the interval 11/8 can only be written one way, as 1o4. Likewise, 13/8 above C is either 3oA or 3oAb, but 13/8 is only 3o6. This is the rationale for using large/small/central rather than major/minor. 11/9 is ambiguously major or minor, but unambiguously central. Intervals names and chord names become unambiguous for la and tha intervals. Another rationale is that commonly used intervals and chords are all central, and get concise names: gu 3rd not gu minor 3rd, A gu not A gu minor, etc. (see #Chord Names below).

Mnemonic (sung to the tune of "Supercalifragilisticexpialidocious"):

Unfortunately seventy can't become se- because that already means 17-exponent (see #Exponents below). Setho means 1317-over, so it can't mean 73-over. So starting at 71, one might use the longer form: 71o is seventy-wo, 73o is seventy-tho, etc. 103o is hundred-tho and 113o is one-ten-tho. Or one might use these terms:

This makes the "pseudo-edomapping" <7 11 16 20 24 26 29 30 32 34 37...]. An alternative method would use the actual 7edo edomapping, but that requires using every other 14edostep as boundaries, harder to remember and much less convenient than the 24edo boundaries used here. Since negative intervals will arise no matter what, convenience is prioritized. For the first 26 primes, the 24edo-based degrees correspond to 7klmrs-edo.

We've seen bi- for double and tri- for triple. Quadruple and quintuple are abbreviated quad- and quin-, as in quadyo or quingu. Colorspeak syllables usually end in one of the five basic vowels. Quad and quin are both exceptions, so quad may optionally be spoken as "kwah", and quin as "kwee".

Exponents affect all subsequent syllables until the -a- delimiter occurs: trizogu = z3g3, but trizo-agu = z3g. The "a" in la- and sa- also acts as a delimiter: trilayo = L3y, not L3y3, which would be trila-triyo.

Long color names use hyphens to make the name easier to parse. There are strict rules for hyphenation, to ensure uniformity.

For more complex ratios, a more direct method is needed:

Converting a ratio: Find the monzo by prime factorization. To find the color, combine all the appropriate colors for each prime > 3, higher primes first. To find the degree, first find the stepspan, which is the dot product of the monzo with the "pseudo-edomapping" discussed above <7 11 16 20 24 26 29 30...]. Then add 1, or subtract 1 if the stepspan is negative. To find the magnitude, add up all the monzo exponents except the first one, divide by 7, and round off. Combine the magnitude, color and degree to make the color name. If the interval is > 1200¢, octave-reduce as desired (e.g. a 9th may or may not become a compound 2nd). Add one co- prefix for every octave removed. Combine repeated syllables so that three yo's becomes triyo, etc. For the exact combination "grammar", see Color notation/Temperament Names.

Staff notation can optionally include a color signature written above the staff. This makes color notation more similar to Johnston notation.

Color notation can optionally be made more similar to Sagittal notation by including two more accidentals, p and q (long forms po and qu = "ku"), to indicate raising/lowering by a pythagorean comma. (See Sagittal-JI-Translated-To-Colors.png.) For example, yF# = ypGb, and zEb = zqD#. This allows trills to always be written as a 2nd, less cluttered.

This 10-page score uses the free open-source font Petaluma Script. The letters are 9pt, except that a "z" between two staff lines is 8pt. File:Evening Rondo colors.pdf 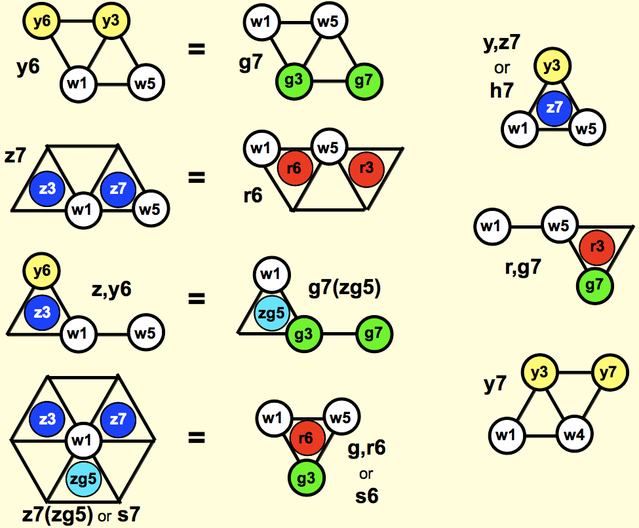 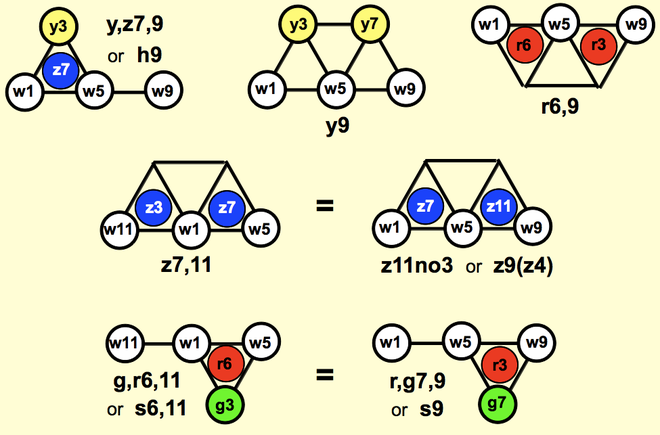 Keys and scales are loosely named after the colors used. Wa is assumed present. In 5-limit JI, the key/scale of A minor is A gu. The Bbh7 - Ebh7 - Bbh7 - Fh9 example in the staff notation section is in Bb yo zo. Like chords, scales can be classified as bicolored (A gu), tricolored (Bb yo zo), etc.

Temperaments are named after the comma(s) they temper out. Commas are named using an alternate format that omits the degree. Meantone is the Gu temperament. Srutal is Sagugu. Porcupine is Triyo or y3T, where "T" stands for temperament. Certain commas over 90¢ use the -bi suffix, e.g. Mavila is Layobi or Ly#2T, because Layo is Schismic. Certain wa commas use yet another alternate format, e.g. Mercator's comma is Wa-53 or w-53.

Multi-comma temperaments have multiple commas in their name. Septimal Meantone is Gu & Ruyoyo and Dominant Meantone is Gu & Rugu. Untempered primes are included with a plus sign. The 2.3.5.7 prime subgroup with 81/80 tempered out is Gu + za.

Ups and Downs, Lifts and Drops, Plain and Mid

Color notation merely renames ratios more conveniently, and strictly speaking, it only applies to just intonation. However, ratios are often used to loosely describe intervals in edos, and colors can be used as well. A more precise notation uses ups and downs (^ and v) as "virtual colors", accidentals that always map to exactly one edostep. Ups and downs are used on the score just like color accidentals are. Notes are named e.g. up C sharp = ^C#. Some edos (5, 7, 9, 12, 16, 19, 23, etc.) don't require ups and downs.

Plain means neither up nor down, analogous to natural meaning neither sharp nor flat. Mid, abbreviated ~, means exactly midway between major and minor. The mid 4th is midway between perfect and augmented, i.e. halfway-augmented, and the mid 5th is halfway-diminished. There is no mid unison or octave. Mid simplifies 72edo notation: m2, ^m2, v~2, ~2, ^~2, vM2, M2. In 72edo, upmid (^~) means one edostep above mid, but in 53edo it means one half edostep above mid. Mid is only used in relative notation, it never applies to notes and never appears on the staff. In 24-edo or 31-edo, the 3rd of C~ is vE or ^Eb, but in 41-edo, it's vvE or ^^Eb.

Chords are named similarly to color notation, with the various qualities downmajor, upminor, mid, etc. replacing colors. Major is the default quality, thus C = C major and Cv = C downmajor. The 6th, 7th and 11th inherit their quality from the 3rd, thus C upminor 9th = C ^Eb G ^Bb D. Chord roots can have ups and downs, as in Cv - Gv - vA^m - Fv or Iv - Vv - vVI^m - IVv. In roman numeral notation, chord roots can be downflat, mid, etc., as in Iv7 - vbIII^m6 - IVv7 or I~7 - ~III - V7. Lower-case roman numerals are never used for minor chords, because vii could mean either seven-minor or down-two-minor. Instead vii is written either VIIm or vIIm. See the notation guide for edos 5-72

Pronunciation: exponent syllables like bi or tri are always unaccented. To emphasize the prime limit, the first occurrence of the highest prime is always accented: Biruyo, Bizozogu. In longer names, the 1st occurrence of sa/la and/or of lower primes may also be accented: Sasa-gugu, Zozotrigu.

Temperaments use "virtual colors" represented with ^ v and / \:

For translations of color notation terms into other languages, see Color notation/Translations. Translating avoids using sounds not in one's native language. For example, in many European languages, "th-" for prime 13 becomes "tr-".