English Wikipedia has an article on:
12 equal temperament

12edo achieved its position because it is the smallest equal division of the octave (edo) which can seriously claim to represent 5-limit harmony, and because as 1/12 Pythagorean comma (approximately 1/11 syntonic comma or full schisma) meantone, it represents meantone. It divides the octave into twelve equal parts, each of exactly 100 cents each unless octave shrinking or stretching is employed. It has a fifth which is quite good at two cents flat. It has a major third which is 13 + 2/3 cents sharp, which works well enough for some styles of music and is not really adequate for others, and a minor third which is flat by even more, 15 + 2/3 cents. It is probably not an accident that as tuning in European music became increasingly close to 12et, the style of the music changed so that the defects of 12et appeared less evident, though it should be borne in mind that in actual performance these are often reduced by the tuning adaptations of the performers.

12edo is the largest equal division of the octave which uniquely patently alternates with an *ed(9/8) in a wtn[clarification needed], and it also contains 2edo, 3edo, 4edo and 6edo as subsets. 12edo is the 5th highly melodic EDO, 12 being both a superabundant and a highly composte number. As of right now, it is the only known EDO that is both highly melodic and zeta, and the only one with a step size larger than the just noticeable difference (~3-4 cents). 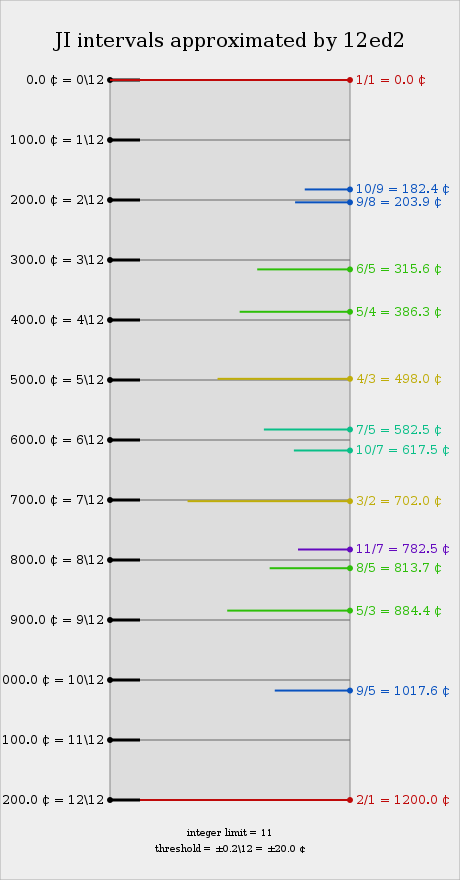 The two most common 12edo mos scales are meantone[5] and meantone[7].

Due to 12edo's dominance, some non-mos scales are also widely used in many musical practices around the world.