19 equal divisions of the octave (19edo), or 19(-tone) equal temperament (19tet, 19et) when viewed from a regular temperament perspective, is the tuning system derived by dividing the octave into 19 equally large steps. Each step represents a frequency ratio of the 19th root of 2, or about 63.2 cents.

Interest in this tuning system goes back to the sixteenth century, when composer Guillaume Costeley used it in his chanson Seigneur Dieu ta pitié of 1558. Costeley understood and desired the circulating aspect of this tuning, which he defined as dividing the just major second into three approximately equal parts. Costeley had other compositions that made use of intervals, such as the diminished third, which have a meaningful context in 19edo, but not in other tuning systems contemporary with the work.

In 1577 music theorist Francisco de Salinas proposed 1/3-comma meantone, in which the fifth is of size 694.786 cents; the fifth of 19edo is 694.737, which is only a twentieth of a cent flatter. Salinas suggested tuning nineteen tones to the octave to this tuning, which fails to close by less than a cent, so that his suggestion is effectively 19edo.

In 1835, mathematician and music theorist Wesley Woolhouse proposed it as a more practical alternative to meantone tunings he regarded as better, such as 50 equal temperament (summary of Woolhouse's essay).

As an approximation of other temperaments

The most salient characteristic of 19et is that, having an almost just minor third and perfect fifths and major thirds about seven cents narrow, it serves as a good tuning for meantone temperament. It is also suitable for magic/muggles temperament, because five of its major thirds are equivalent to one of its twelfths. For all of these there are more optimal tunings: the fifth of 19et is flatter than the usual for meantone, and a more accurate approximation is 31 equal temperament. Similarly, the generating interval of magic temperament is a major third, and again 19edo's is flatter; 41 equal temperament more closely matches it. It does make for a good tuning for muggles, which in 19edo is the same as magic. 19edo's 7-step supermajor third can be used for sensi, whose generator is a very sharp major third, two of which make an approximate 5/3 minor sixth, though 27edo and 46edo are better sensi tunings for the 13-limit approximations of sensi.

However, for all of these 19et has the practical advantage of requiring fewer pitches, which makes physical realizations of it easier to build. (Many 19et instruments have been built.) 19et is in fact the second equal temperament, after 12et which is able to deal with 5-limit music in a tolerable manner, and is the fifth (after 12) zeta integral edo. It is less successful with 7-limit (but still better than 12et), as it eliminates the distinction between a septimal minor third (7/6), and a septimal whole tone (8/7). 19edo also has the advantage of being excellent for negri, keemun, godzilla, magic/muggles and triton/liese, and fairly decent for sensi. Keemun and negri are of particular note for being very simple 7-limit temperaments, with their mos scales in 19edo offering a great abundance of septimal tetrads. The Graham complexity of a 7-limit tetrad is 6 for keemun, 7 for negri, 8 for godzilla, 10 for meantone, 11 for triton, 12 for magic/muggles and 13 for sensi.

Being a zeta integral tuning, the 13-limit is represented relatively well, though only the 2.3.5.7.13 subgroup is represented consistently. Practically 19edo can be used adaptively on instruments which allow you to bend notes up: by different amounts, the 3rd, 5th, 7th and 13th harmonics are all tuned flat. The same cannot be said of 12edo, in which the 5th and 7th are - not only farther than they are in 19, but fairly sharp already. 19edo's negri, sensi and semaphore scales have many 13-limit chords. (You can think of the sensi[8] 3L 5s mos scale as 19edo's answer to the diminished scale. Both are made of two diminished seventh chords, but sensi[8] gives you additional ratios of 7 and 13.)

Another option would be to use a stretched octave; the zeta function-optimal tuning has an octave of roughly 1203 cents. Stringed instruments, in particular the piano, are frequently tuned with stretched octaves anyway due to the inharmonicity inherent in strings, which makes 19edo a promising option for them. Octave stretching also means that an out-of-tune interval can be replaced with a compounded or inverted version of it which is near-just. For instance, if we are using 93ed30 (a variant of 19edo in which 30:1 is just), then we have near-just minor thirds (6:5), compound major thirds (as 5:1), and compound fifths (as 6:1), giving us versions of everything in the 5-limit tonality diamond. The compound major and minor triads (1:5:6 and 30:6:5) are near-just as well.

As a means of extending harmony

Because 19edo allows for more blended, consonant harmonies than 12edo does, it can be a much better candidate for using alternate forms of harmony such as quartal, secundal, and poly chords. William Lynch suggests the use of seventh chords of various types to be the fundamental sonorities with a triad deemed as incomplete. Higher extensions involving the 7th harmonic as well as other non diatonic chord extensions which tend to clash in 12edo blend much better in 19edo.

In addition, Joseph Yasser talks about the idea of a 12 tone supra diatonic scale where the 7 tone major scale in 19edo becomes akin to the pentatonic of western music; as it would sound to a future generation, ambiguous and not tonally fortified. As paraphrased "A system in which the undeniable laws of tonal gravity exist, yet in a much more complex tonal universe." Yasser believed that music would eventually move to a 19-tone system with a 12-note supra diatonic scale would become the standard. While this has yet to happen, Yasser's concept of supra-diatonicity is intriguing and worth exploring for those wanting to extend tonality without sounding too alien.

38edo, which doubles 19edo, provides an approximation of harmonic 11 that works well with the flat tendency of its 5-limit mapping. See undevigintone. 57edo effectively corrects the harmonic 7 to just, although it is 76edo that fits the best. See meanmag.

Standard 12edo notation can be used, whether it is staff notation (with five lines), letter notation (with standard accidentals), solfege, or sargam. Note that D# and Eb are two different notes.

* based on treating 19edo as a 2.3.5.7.13 subgroup temperament; other approaches are possible.

Using color notation, qualities can be loosely associated with colors:

Key signatures are the same, but with the extra notes and different enharmonic equivalents, some key signatures can get messy. For example, the key of Bbb would have double-flats on B and E, and flats on C, D, F, G, and A. Thinking of rewriting this key as A# might seem better, but then the key signature would contain double-sharps on C, F, and G, and sharps on A, B, D, and E, which is actually worse.

All 19edo chords can be named using conventional methods, expanded to include augmented and diminished 2nd, 3rds, 6ths and 7ths. Here are the zo, gu, yo and ru triads:

The last two chords illustrate how the 15\19 interval can be considered as either 7/4 or 12/7, and how 19edo tends to conflate zo and ru ratios.

Since 19 is prime, all rank-2 temperaments in 19edo have one period per octave (i.e. are linear). Therefore you can make a correspondence between intervals and the linear temperaments they generate. 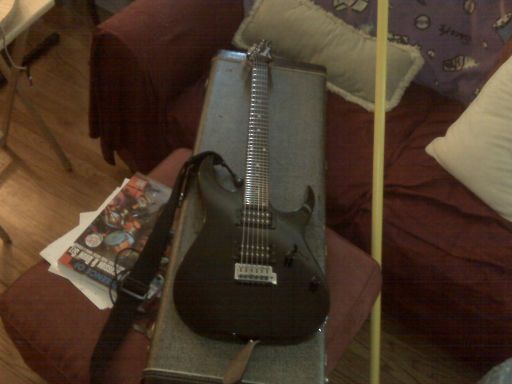