4L 7s refers to the structure of MOS scales with generators ranging from 1\4edo (one degree of 4edo, 300¢) to 3\11edo (three degrees of 11edo, 327.27¢), representing approximate diatonic minor thirds (6/5). One of the harmonic entropy minimums in this range is Kleismic/Hanson.

4L 7s has a heptatonic subset, which is the hard end of the spectrum of the smitonic scale (4L 3s).

The notation used in this article is LssLsLssLss = АВГДЕЅЗИѲІѦА, based on old Cyrillic numerals 1-10, and the addition of the small yus (Ѧ) for 11 (old "ya" symbolically representing І҃А҃=11). A titlo can be optionally used as a numeric sign (А҃), depending on font rendering, clarity, and style. Chromas are represented by regular sharps and flats.

The generator chain for this scale is as follows:

The soft range for tunings of kleistonic encompasses parasoft and hyposoft tunings. This implies step ratios smaller than 2/1, meaning a generator sharper than 4\15 = 320¢.

This is the range associated with extensions of Orgone[7]. The small step is recognizable as a near diatonic semitone, while the large step is in the ambiguous area of neutral seconds.

Soft kleistonic edos include 15edo and 26edo. The sizes of the generator, large step and small step of kleistonic are as follows in various soft kleistonic tunings: 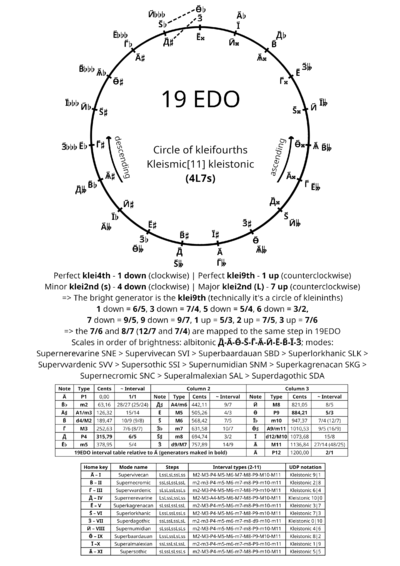 This range represents one of the harmonic entropy minimums, where 6 generators make a just diatonic fifth (3/2), an octave above. This is the range associated with the eponymous Kleismic (aka Hanson) temperament and its extensions.

The minor third is at its purest here, but the resulting scales tend to approximate intervals that employ a much higher limit harmony, especially in the case of the superhard 23edo. However, the large step is recognizable as a regular diatonic whole step, approximating both 10/9 and 9/8, while the small step is a slightly sharp of a quarter tone.

The temperament known as Myna (a pun on "minor third") resides here, as this is the range where 10 generators make a just diatonic fifth (3/2), two octaves above. These scales are stacked with simple intervals, but are melodically difficult due to the extreme step size disparity, where the small step is generally flat of a quarter tone.

The names are based on smitonic modes, modified with the "super-" prefix, with thematic additions, as there are an extra 4 modes available.