One way of distinguishing the diatonic scale is by considering it a moment of symmetry scale produced by a chain of "fifths" (or "fourths") with the step combination of 5L 2s. Among the most well-known variants of this MOS proper are 12EDO's diatonic scale along with both the Pythagorean diatonic scale and the various meantone systems. Other similar scales referred to by the term "diatonic" can be arrived at different ways – for example, through just intonation procedures, or with tetrachords. However, it should be noted that at least the majority of the other scales that fall under this category – such as the just intonation scales that use more than one size of whole tone – are actually JI detemperings or tempered approximations of them that both closely resemble and are derived from this MOS.

On the term diatonic

In TAMNAMS (which is the convention on all pages on scale patterns on the wiki), diatonic exclusively refers to 5L 2s. Other diatonic-based scales (specifically with 3 step sizes or more), such as Zarlino, blackdye and diasem, are called detempered (if the philosophy is RTT-based) or deregularized (RTT-agnostic) diatonic scales. The adjectives diatonic-like or diatonic-based may also be used to refer to diatonic-based scales, depending on what's contextually the most appropriate.

The 5L 2s MOS scale has this generalized form.

Insert 2 for L and 1 for s and you'll get the 12EDO diatonic of standard practice.

So you have scales where L and s are nearly equal, which approach 7EDO:

And you have scales where s becomes so small it approaches zero, which would give us 5EDO:

"Flattone" systems, such as 26EDO.

The near-just part of the region is of interest mainly for those interested in Pythagorean tuning and large, accurate EDO systems based on close-to-Pythagorean fifths, such as 41EDO and 53EDO. This class of tunings is called schismic temperament; these tunings can approximate 5-limit harmonies very accurately by tempering out a small comma called the schisma. (Technically, 12EDO tempers out the schisma and thus is a schismic tuning, but it is nowhere near as accurate as schismic tunings can be.)

The sharp-of-just part of this range includes so-called "neogothic" or "parapyth" systems, which tune the diatonic major third slightly sharply of 81/64 (around 414 to 423 cents) and the diatonic minor third slightly flatly of 32/27 (around 282 to 290 cents). Good neogothic EDOs include 29EDO and 46EDO. 17EDO is often considered the sharper end of the neogothic spectrum; its major third at 423 cents is considerably more discordant than in flatter neogothic tunings.

If 4\7 (four degrees of 7EDO) is at one extreme and 3\5 (three degrees of 5EDO) is at the other, all other possible 5L 2s scales exist in a continuum between them. You can chop this continuum up by taking "freshman sums" of the two edges - adding together the numerators, then adding together the denominators (i.e. adding them together as if you would be adding the complex numbers analogous real and imaginary parts). Thus, between 4\7 and 3\5 you have (4+3)\(7+5) = 7\12, seven degrees of 12EDO.

If we carry this freshman-summing out a little further, new, larger EDOs pop up in our continuum.

Tunings above 7\12 on this chart are called "negative tunings" (as they lessen the size of the fifth) and include meantone systems such as 1/3-comma (close to 11\19) and 1/4-comma (close to 18\31). As these tunings approach 4\7, the majors become flatter and the minors become sharper. 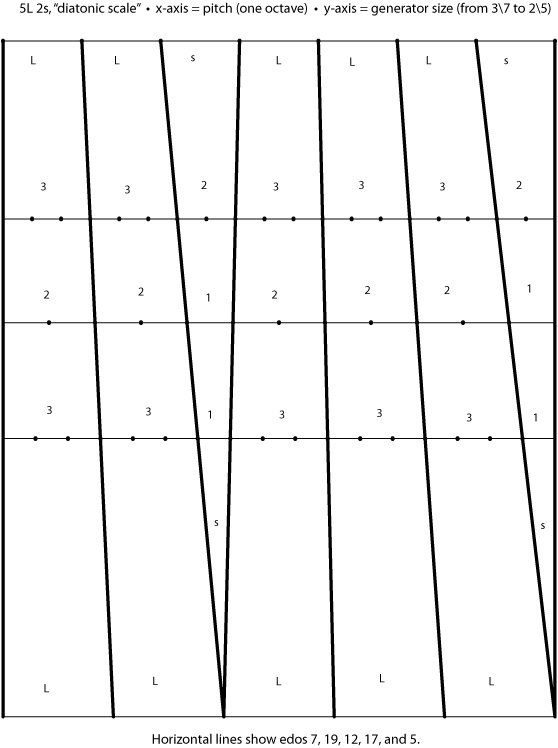 Because the diatonic scale is so widely used, it should be no surprise that there are a number of noteworthy scales of different sorts related to this MOS.