Sensi is a regular temperament for the 2.3.5.7.13 subgroup which is generated by an extremely sharp major third of about 443 cents which represents both 9/7 and 13/10. It is so named because the generator is a "semisixth": two generators make a major sixth which approximates 5/3, which cannot occur in 12edo. Equal temperaments that support sensi include 19edo, 27edo, and 46edo.

The most common consonant triad in sensi is the 6:10:13 triad, which spans 3 generators. Sensi[8] has five 6:10:13 triads, four 7:9:13 triads, three 5:6:7:9 tetrads and one 5:6:7:9:13 pentad. Having many diminished triads and consonant chords without roots (fundamentals), it is similar to the 12edo diminished scale in some ways. Sensi is interesting mainly because it gives new 13-limit interpretations to fairly familiar (in the sense of extended meantone-like) intervals.

Melodically, sensi[8] sounds fairly familiar because many intervals are either 5-limit or have familiar categorical interpretations, being represented in the meantone tuning 19edo. For example, the small step of about 130 cents categorizes pretty well as a large semitone (except at places in the scale where two of them make a flat subminor third); the large step is a small whole tone representing 10/9. 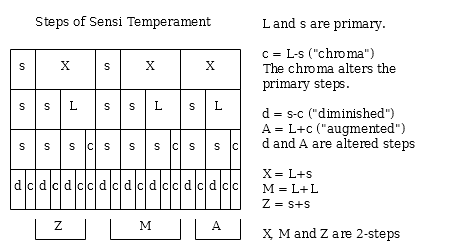 Note that X, M and Z are not standard, but d and A are; they are short for "diminished" and "augmented".

A Diagram relating the Sensi generator chain (horizontal axis) to the steps within the octave (vertical axis) for Sensi[8] and [11]: 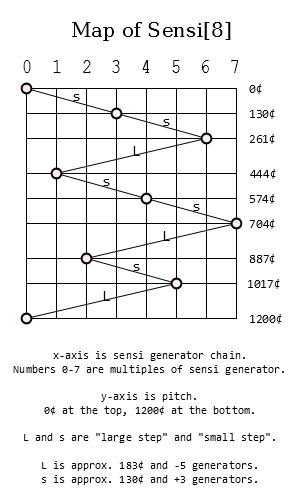 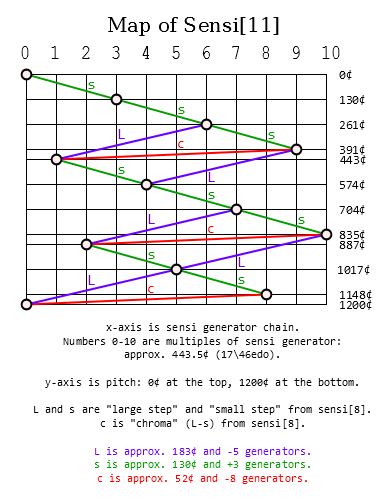 A Diagram showing a layout for playing Sensi Temperament on an Isomorphic Keyboard:

The darkest hexagons represent the same note (eg. C), but offset by octaves. The next-darkest hexagons show the notes of Sensi[5]. Imagine stepping from hex to hex as you move across the keyboard from left to right, landing only on the darkest and next-darkest hexes. The light red hexagons show additional notes needed to play Sensi[8]. The Large step of Sensi[8] is represented by a move straight down, so this pattern is a little more zig-zaggy than the pattern for Sensi[5]. Add the white hexes and you have Sensi[11]. The small step of Sensi[11] (indicated in the diagram as "c" for chroma), is represented by a move straight down and down-left. This pattern actually involves moving backward in the horizontal direction, and is therefore more zig-zaggy.

SOMEONE PLEASE MAKE ONE OF THESE AND SEND IT TO DUSTIN SCHALLERT!