English Wikipedia has an article on:
31 equal temperament

31 equal divisions of the octave (31edo), or 31(-tone) equal temperament, tricesimoprimal meantone temperament (31tet, 31et) when viewed from a regular temperament perspective, is the tuning system derived by dividing the octave into 31 equally large steps. Each step is equivalent to a frequency ratio of the 31st root of 2, or 38.7 cents. The term tricesimoprimal was first used by Adriaan Fokker.

31edo's perfect fifth is flat of the just interval 3/2 (over five cents), as befits a tuning supporting meantone, but the major third is less than a cent sharp (of just 5/4), making it slightly sharp of quarter-comma meantone. 31's approximation of 7/4, a cent flat, is also very close to just. It is a very tone-efficient melodic approximation of the 11-limit (and specifically the 11-odd-limit), although the fact that it equates 14/11 with 9/7 and 11/8 with 15/11 could potentially be considered too much tuning damage. Many 7-limit JI scales are well-approximated in 31 (with tempering, of course).

Because of the near-just 5/4 and 7/4 and because the 11th harmonic is almost twice as flat as the 3rd harmonic, 31edo is relatively quite accurate and is the 6th zeta integral edo, the 7th zeta gap EDO, a zeta peak EDO and a zeta peak integer EDO, meaning it is a strict zeta EDO. Another way in which 31edo is especially accurate is that it represents a record in Pepper ambiguity in the 7-, 9- and 11-odd-limit, which it is consistent through.

One step of 31edo, measuring about 38.7¢, is called a diesis because it stands in for several intervals called "dieses" (such as 128/125 and 648/625) which are tempered out in 12edo. The diesis is a defining sound of 31edo; when it does not appear directly in a scale, it often shows up as the difference between two or more intervals of a similar size. The diesis is demonstrated in SpiralProgressions. Zhea Erose's 31edo music uses the interval frequently.

All 31edo chords can be named using ups and downs. Alterations are always enclosed in parentheses, additions never are. An up, down or mid immediately after the chord root affects the 3rd, 6th, 7th, and/or the 11th (every other note of a stacked-3rds chord 6-1-3-5-7-9-11-13). Here are the zo, gu, ilo, yo and ru triads:

For a more complete list of chords, see 31edo Chord Names and Ups and Downs Notation #Chords and Chord Progressions.

Neutral circle-of-fifths notation is much like ups and downs notation. Between C and D (do and re) for example, we have the following notes:

While using double sharp and double flat may seem confusing because it alternates between C and D, it provides a way of writing chords that is consistent with traditional notation. For example, the subminor7 chord 12:14:18:21 is written like so:

The Revo flavor of Sagittal notation from the appendix to The Sagittal Songbook by Jacob A. Barton:

Whereas 12-edo has a circle of twelve 5ths, 31-edo has a spiral of twelve 5ths (since 18\31 is on the 7\12 kite in the scale tree). This spiral of 5th shows 31-edo in a 12-edo-friendly format. Excellent for introducing 31-edo to musicians unfamiliar with microtonal music. The two innermost and two outermost intervals on the spiral are duplicates. 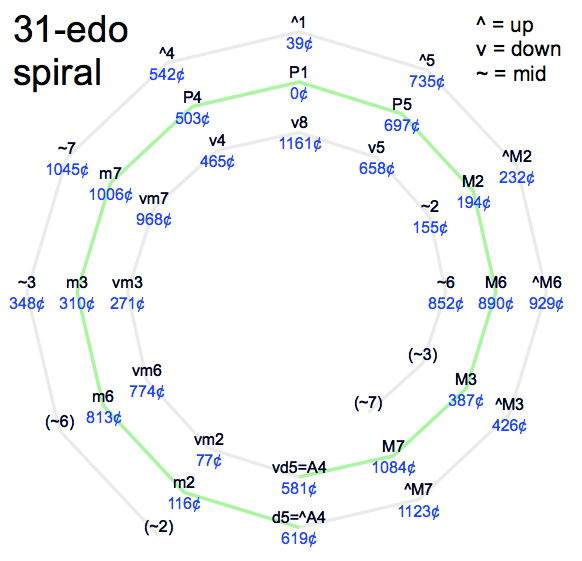 31edo can be notated with a seperate semi/sesqui sharp/flat chain (like 17edo), with its own enharmonic circle of fifths. 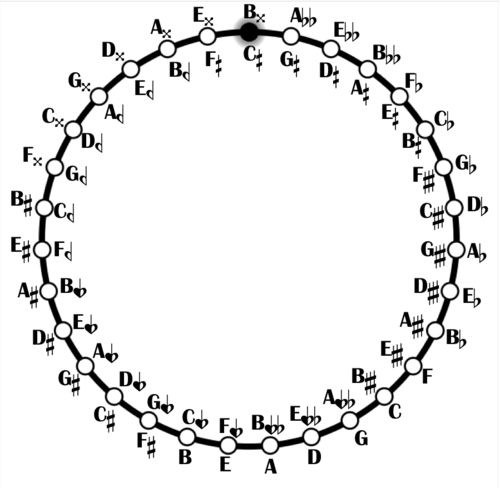 The fact that 31edo has meantone diatonic and chromatic scales is well-known, but some other MOSes and MOS chains[clarification needed] are also useful:

See #Rank-2 temperaments for a table of MOSes and their temperament interpretations.

In mode 16, the most closely-matched harmonics are the composite ones, 21 and 25. Of the other harmonics:

A large open list of subsets from 31edo that people have named: