Mohajira (/mʊˈhɑːdʒɪɹə, -hæ-/ muu-HA(H)-jirr-ə or /məˈhɑːdʒɪɹə, -hæ-/ mə-HA(H)-jirr-ə, named by Jacques Dudon from Arabic مهاجرة Muhājirah) is a meantone temperament that splits 3/2 into two 11/9's and the 6/5 into two 11/10's. It can be thought of as meantone with quarter tones as it merely spits the generator 3/2 into two equally spaced neutral thirds. Among the most common is the seven note MOS mohajira[7] which consists of the steps LsLsLss, as well as the MODMOS "Rast" which merely flats the fourth by one quarter tone.

There are seven diatonic modes of mohajira which are structured in an analogous way to the seven church modes of the major scale. They can be thought of as quarter tone altered modes in a 24 EDO setting, but also as microtonal altered scales in any equal temperament. While the Mohajira[7] MOS by itself is quite beautiful, the Modmos, Rast tends to be more expressive as it contains a few major and minor thirds allowing for more contrast.

Because there are too many possible Mohajira MOS and MODMOS, Kentaku has organized a way to think of the progression of accidentals in the modes of Mohajira.

The scales are organized based on evoking slightly different colors and categorized by different levels of alteration from a meantone scale. A MOS of Mohajira[10] can be used in order to improvise on all the common MODMOS of Mohajira.

For the modes of the Mohajira[7] MOS, names with "Ice" have been proposed, referring to Hidekazu Wakabayashi's Iceface tuning.

Strangely, the mode names do not match the typical order of western mode names due to the odd intervalic nature of Mohajira temperament. 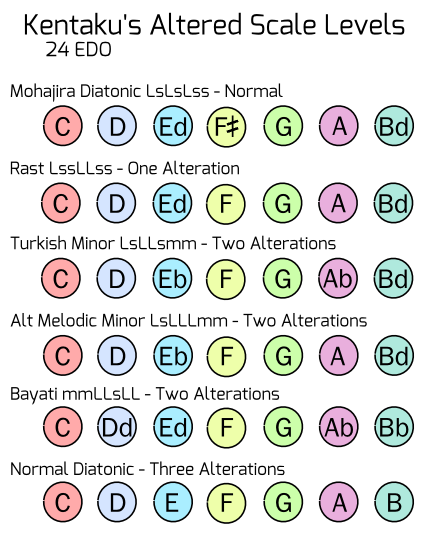 Turkish Major is a tempered max-variety 3 scale that is equivalent to a smitonic scale with one of its small steps diminished. This makes a Neapolitan Major scale which does not temper out 36/35. Not tempering 36/35 is actually quite useful, because it's the difference between 4:5:6 and 6:7:9 triads. This is important in a neutral third tone system because the smoothest neutral chord with a perfect fifth is 6:7:9:11. As a result, results of tempering out 81/80 or 64/63 are not as bad, because the scale must detemper one if it tempers out the other. Strangely, the detempering of 36/35 is not evident due to the odd intervalic nature of the Turkish Major scale. Smitonic in a sense does the opposite of what Neapolitan Major does in common practice, exaggerating 36/35 to the point that 4:5:6 and 6:7:9 triads no longer have a recognizable 3/2, and the small step of Turkish Major becomes equal to the medium steps.

While the structure of mohajira[7] may seem similar to the shape of meantone, because of there being only one size of thirds, it's better to harmonize the scale with a combination of various voicings of 1-5-7-4 and 1-5-7-3 as well as other combinations of chords such as quartal tetrads. The Rast scales generally have more variety as they contain major and minor thirds as well as neutral thirds.

To introduce more interest into harmony involving mohajira, a 10 note MOS can be used to incorporate various synthetic versions of traditional turkish and middle eastern scales:

The intervals of Mohajira and Neutral harmony work in an almost reverse manner from meantone. The most consonant is 3/2 and 4/3 followed by 11/6, 11/9 and 11/8. In context of a chord with a perfect fifth, 11/9's tend to produce a rather rough chord that sounds good in many contexts but is quite rough as a tonic chord. It can be good to think of the neutral seventh 11/6 and 3/2 as the base intervals of a chord with 11/8 and 4/3 acting almost in an analogous way to the major and minor third in meantone. This is why 11/8 can be called the major fourth in 24 ET.