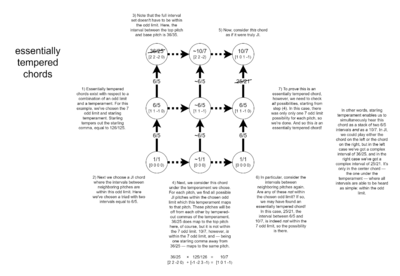 By an essentially tempered dyadic chord is meant a chord defined in an abstract regular temperament such that each interval belongs to a consonance set, but there is no corresponding just dyadic chord. This means there is no just chord such that each interval, when mapped by the abstract regular temperament, belongs to the consonance set. For example, the chord 1-6/5-10/7, when mapped by starling temperament, which tempers out 126/125, has each of its intervals in the set of 7-odd-limit consonances which is the tempering of the 7-odd-limit diamond by 126/125 (this is because 10/7 is off from 36/35 by 126/125, and therefore 10/7 and 36/35 are tempered together in starling temperament, and since 36/35 = (6/5)², the interval from 6/5 to 10/7 in starling may be heard as a second move by 6/5). However, (10/7)/(6/5) = 25/21 is 25-odd-limit, and there is no other 7-odd-limit just dyadic chord which can be used instead to give the result, so it is an essentially tempered dyadic chord. Essentially tempered dyadic chords are a related notion to comma pumps, and can be used as a basis for creating pumps. Using essentially tempered chords in chord progressions breaks the harmony out of exclusively just chord relations, and serves as a sort of harmonic lubricant imparting fluidity and dynamism to the harmony, at the cost fairly often of some blurring of the sense of tonality.

Kite Giedraitis has proposed the term "innate comma chord" to describe the type of chord that can't be mapped to just intonation in a given prime limit and odd limit, hence a chord that won't "ring". This term is broader than the term "essentially tempered chord" because it includes the possibility that the chord is not tempered at all, and contains a wolf interval. For example, the augmented triad in 5-limit JI is an innate comma chord, because it's impossible to tune all three major 3rds to 5/4. The innate comma here is 128/125 = 41¢. In practice, it might be sung or played justly, but with a large odd limit and hence a wolf interval, as 1/1 - 5/4 - 25/16 or 1/1 - 5/4 - 8/5. Or it might be tempered, e.g. in 12-edo as 0¢ - 400¢ - 800¢ - 1200¢. In 7-limit JI, one of the 3rds can be tuned to 9/7. The innate comma is reduced to 225/224, only 8¢. This comma can be distributed among the three 3rds, resulting in tempering each only a few cents, which may be close enough to be acceptable. In 11-limit JI, this chord isn't an innate comma chord, because it can be tuned justly as 7:9:11, a low enough odd limit to "ring". However, it's debatable that this chord qualifies as an augmented triad, because the upper 3rd hardly sounds major.

An anomalous saturated suspension, or ASS, is a term introduced by Graham Breed for a q-limit just dyadic chord to which no pitch q-limit pitch class can be added while keeping it in the q-limit, and which is neither an otonal or a utonal chord; that is, it is not contained as a subchord of either the 1:3:5: ... :q chord or the 1:1/3:1/5: ... :1/q chord. The existence of such chords was discovered by Paul Erlich. Below are listed two 9-limit ASSes of special interest, as they avoid intervals smaller than a minor whole tone.

For a complete list of ASS chords through the 23-limit see Anomalous saturated suspension.

Here are some pages on certain essentially tempered dyadic chords.