From Xenharmonic Wiki
(Redirected from 53ED2)
Jump to: navigation, search

The famous 53 equal division divides the octave into 53 equal comma-sized parts of 22.642 cents each.

53EDO has also found a certain dissemination as an EDO tuning for Arabic/Turkish/Persian music.

It can also be treated as a no-elevens, no-seventeens tuning, on which it is consistent all the way up to the 23-limit.

Whereas 12-edo has a circle of twelve 5ths, 53-edo has a spiral of twelve 5ths (since 31\53 is on the 7\12 kite in the scale tree). This shows 53-edo in a 12-edo-friendly format. Excellent for introducing 53-edo to musicians unfamiliar with microtonal music. The two innermost and two outermost intervals on the spiral are duplicates. 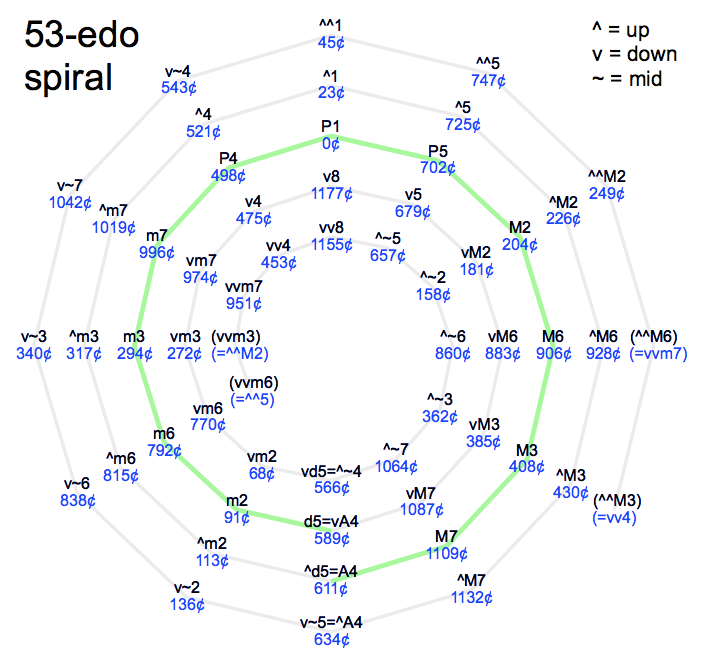 53edo provides excellent approximations for the classic 5-limit just chords and scales, such as the Ptolemy-Zarlino "just major" scale.

One notable property of 53EDO is that it offers good approximations for both pure and pythagorean major thirds.

The perfect fifth is almost perfectly equal to the just interval 3/2, with only a 0.07 cent difference! 53EDO is practically equal to an extended Pythagorean. The 14- and 17- degree intervals are also very close to 6/5 and 5/4 respectively, and so 5-limit tuning can also be closely approximated. In addition, the 43-degree interval is only 4.8 cents away from the just ratio 7/4, so 53EDO can also be used for 7-limit harmony, tempering out the septimal kleisma, 225/224.

The following table shows how 15-odd-limit intervals are represented in 53edo. Octave-reduced prime harmonics are bolded; inconsistent intervals are in italic.

Bach WTC1 Prelude 1 in 53 by Bach and Mykhaylo Khramov

Bach WTC1 Fugue 1 in 53 by Bach and Mykhaylo Khramov

The Fallen of Kleismic15play by Chris Vaisvil