From Xenharmonic Wiki
(Redirected from 72-edo)
Jump to: navigation, search

72-tone equal temperament approximates 11-limit just intonation exceptionally well, is consistent in the 17-limit, and is the ninth Zeta integral tuning. The octave, fifth and fourth are the same size as they would be in 12-tone, 72, 42 and 30 steps respectively, but the major third (5/4) measures 23 steps, not 24, and other major intervals are one step flat of 12-et while minor ones are one step sharp. The septimal minor seventh (7/4) is 58 steps, while the undecimal semiaugmented fourth (11/8) is 33.

72 is an excellent tuning for miracle temperament, especially the 11-limit version, and the related rank three temperament prodigy, and is a good tuning for other temperaments and scales, including wizard, harry, catakleismic, compton, unidec and tritikleismic.

For a more complete list, see Ups and Downs Notation - Chord names in other EDOs.

Commas tempered out by 72edo include...

72edo is the ninth zeta integral edo, as well as being a peak and gap edo, and the maximum value of the Z function in the region near 72 occurs at 71.9506, giving an octave of 1200.824 cents, the stretched octaves of the zeta tuning. Below is a plot of Z in the region around 72. 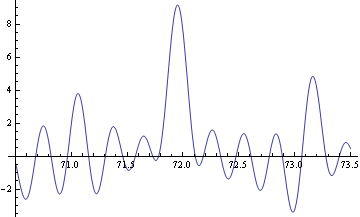 Lazy Sunday by Jake Freivald in the lazysunday scale.