5 equal divisions of the octave (or 5edo) is the tuning system derived by dividing the octave into 5 equal steps of 240 cents each, or the fifth root of two. 5edo is the third prime edo, after 2edo and 3edo. Most importantly, 5edo is the smallest edo containing xenharmonic intervals — 1edo, 2edo, 3edo, and 4edo are all subsets of 12edo.

A chromatic 5edo scale on C.

If 5edo is regarded as a temperament, which is to say as 5tet, then the most salient fact is that 16/15 is tempered out. This means in 5tet the major third and the fourth, and the minor sixth and the fifth, are not distinguished; this is 5-limit father temperament.

Also tempered out is 27/25, if we temper this out in preference to 16/15 we obtain bug temperament, which equates 10/9 with 6/5: it is a little more perverse even than father. Because these intervals are so large, this sort of analysis is less significant with 5 than it becomes with larger and more accurate divisions, but it still plays a role. For example, I-IV-V-I is the same as I-III-V-I and involves triads with common intervals because of fourth-thirds equivalence.

Despite its lack of accuracy, 5edo is the second zeta integral edo, after 2edo. It also is the smallest equal division representing the 9-odd-limit consistently, giving a distinct value modulo five to 2, 3, 5, 7 and 9. Hence in a way similar to how 4edo can be used, and which is discussed in that article, it can be used to represent 7-limit intervals in terms of their position in a pentad, by giving a triple of integers representing a pentad in the lattice of tetrads/pentads together with the number of scale steps in 5edo. However, while 2edo represents the 3-limit consistently, 3edo the 5-limit, 4edo the 7-limit and 5edo the 9-limit, to represent the 11-limit consistently with a patent val requires going all the way to 22edo. Nevertheless, because the comma tempered out for this edo's circle of fifths is 256/243, and since this interval is smaller than half a step, 5edo is the second edo to demonstrate 3-to-2 telicity — that is, when not counting the comparatively trivial 1edo.

In addition, considering 5edo as a no-5's temperament improves its standing significantly. It is especially prominent as a simple 2.3.7 temperament with high relative accuracy (the next edo doing it better being 17), and is the optimal patent val for the no-5s trienstonic (or Zo) temperament. 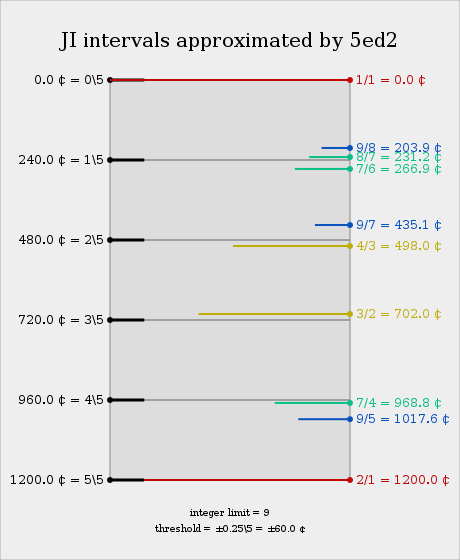 Kite Giedraitis has proposed a pentatonic notation that retains the appearance of heptatonic names, to avoid the confusion caused by one's lifelong association of "fourth" with 4/3, not 3/2. The interval names are unisoid, subthird, fourthoid, fifthoid, subseventh and octoid, or 1d s3 4d 5d s7 8d. When notating larger edos such as 8 or 13, there are major or minor sub3rds and sub7ths. Note that 15/8 is an octoid.

5 is a prime number so 5edo contains no sub-edos. Only simple cycles:

5edo does not have any strong consonance nor dissonance. The 240 cent interval can serve as either a major second or minor third, and the 960 cent interval as either a major sixth or minor seventh. The fourth is about 18 cents flat of a just fourth, making it rather "dirty" but recognizable. The fifth is likewise about 18 cents sharp of a just fifth, dissonant but still easily recognizable.

In contrast to other edos, all of the notes can be used at once in order to get a functioning scale. (As in Blackwood in 10edo).

Smallest edo that can be used for melodies in a "standard" way. The relatively large step of 240 cents can be used as major second for the melody construction. The scale has whole-tone as well as pentatonic character.

Either way, it is hard to wander very far from where you start. However, it has the scale-like feature that there are (barely) enough notes to create melody, in the form of an equal version of pentatonic.

For any musician, there is no substitute for the experience of a particular xenharmonic sound. The user going by the name Hyacinth on Wikipedia and Wikimedia Commons has many xenharmonic MIDI's and has graciously copylefted them! This is his 5-TET scale MIDI:

There is also much 5edo-like world music, just search for "gyil" or "amadinda" or "slendro".