The linear notations from Erv Wilson is a system of notation created to fit linear temperaments & equal scales on a Bosanquet keyboard. They were first mentioned in the second volume of the Xenharmonikôn in 1974, but discussed more in-depth in the third volume, published in the spring of 1975. The system describes notations to be used for EDOs with different versions depending on the the size of the perfect fifth.

A Doorway to Dialog 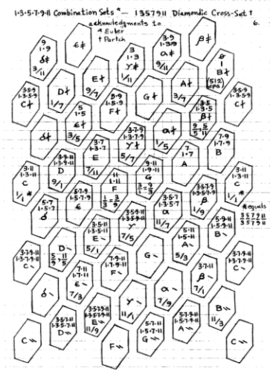 Picture of the Eikosany keyboard, pg. 7

Wilson makes an example of a scale that could be made into a linear temperament by presenting his Eikosany scale on a keyboard inspired by one for 41 notes. With the layout he chose, D\ and βł fall onto a homogeneous position from C (two keys down for D\, two keys up for βł). Another detail shows that the 3, 9, & 3*9 keys are two schismas off from the 5*7*11, 3*5*7*11, and 5*7*9*11 keys. With these two oddities, he suggests that a 41EDO keyboard would be proper in hosting the Eikosany.

Wilson says that he's "emphatically biased towards the positive systems", where the fifth is greater than Pythagorean. He mentions that unlike systems like meantone, where the fifth is damaged to make the third pure, a positive system would be the first time in Western history where a tuning had pure thirds and pure fifths. If the third was damaged, it would only be to help turn the harmonic seventh and eleventh pure, which Wilson calls "far lesser apostles". He also brings up that the ragas of India could be hosted in these positive systems as well.

On the next page, he gives a section of his thoughts on the original Bosanquet layout, noting things like key shape and the width of intervals. In the current & future papers, he suggests & uses smaller hexagonal keys, saying that it eliminates dead space & suits more scales, like meantone & just intonation. Along with the Eikosany keyboard, he demonstrates two other keyboards with this variation of the layout, those being the 22 shruitis of India and a traditional Arabic system of 17 notes. 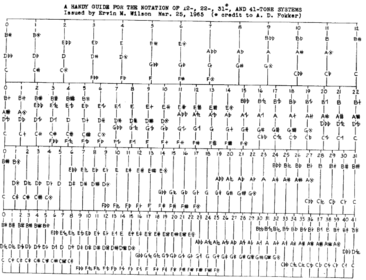 An example of Wilson's notation system

On the last two pages of the document, Wilson makes mention of a system of notation he issued in 1965. In these pages, he makes two categories based on how many steps C is from C#, and how many steps B# is from C. If C-C# is one step, its singular, two steps is binary, three steps is ternary, etc etc; if B# is less than C, its negative, neutral if they're the same, positive if B# is greater by one step, 2bly positive if B# is greater by two steps, etc etc. He also gives examples for accidentals up to the quaternary system; by this point, he hasn't made accidentals for a quinary system.

On Linear Notations and The Bosanquet Keyboard

In this paper, Wilson elaborates more on the notation he first brought up in 1974. First, he brings up three families of fifths and their direction on the Bosanquet keyboard:

Although the positive & negative notations of each family are part of the same system, they require different treatments in order to stay melodically consistent. Thus, there are different nominal systems for each kind of system. He gives four examples: 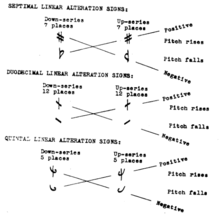 For accidentals, he suggests two pairs; one for positive systems, one for negative. Since there is three systems mentioned here, there are twelve total accidentals.

A graph to show the evolution of nominals in different systems

Wilson made the accidentals mirror each other so that there would be no confusion in the sheet music, assuming one won't use positive & negative accidentals in the same piece. At this time, Wilson hadn't explored novenal (5\9) or tridecimal (8\13) accidentals, saying "I need to experiment more with the septimally negative and quintally positive systems before expressing a view on this."

For the last few pages of the paper, he demonstrates six keyboards to demonstrate each unique system mentioned in the paper. Along with this, he also includes the notation for each system. In order of appearance, the EDOs used for the notation section are 41, 31, 23, 26, and 22EDO.

In the document for Wilson's On Linear Notations and The Bosanquet Keyboard from the Wilson Archives, Kraig Grady has been working on an appendix from Praveen Venkataramana, showing not only two more systems of fifths (octal [5/8] & novenal) but also demonstrating the various ways you can notate EDOs with these systems up to 72EDO. At the time of writing, there appears to be work showing that this can be applied to MOS scales and constant structures, though Grady has not added these yet.