7 equal divisions of the octave (7edo) is the tuning system derived by dividing the octave into 7 equal steps of 171.4 cents each, or the seventh root of 2. It is the fourth prime edo, after 2edo, 3edo and 5edo. It is the third zeta integral edo.

A chromatic 7edo scale on C.

Equal-heptatonic scales are used in non-western music in African cultures as well as an integral part of early Chinese music[1]. Also Georgian music seems to be based on near-equal 7-step scales. It has been speculated in "Indian music:history and structure", that the Indian three-sruti interval of 165 cents is close enough to be mistaken for 171 cents. (or 1.71 semitones).

7edo can be used as an interesting diatonic scale choice as well in tunings such as 14edo or 21edo.

The seventh of 7edo is almost exactly the 29th harmonic (29/16), which can have a very agreeable sound with harmonic timbres. However it also finds itself nested between ratios such as 20/11 and 9/5, which gives it considerably higher harmonic entropy than 7/4, a much simpler overtone seventh.

Similarly, in equi-heptatonic systems the desire for harmonic sound may dictate constant adjustments of intonation away from the theoretical interval of 171 cents. One of the most impressive areas in Africa in which a pen-equidistant heptatonic scale is combined with a distinctively harmonic style based on singing in intervals of thirds plus fifths, or thirds plus fourths, is the eastern Angolan culture area. This music is heptatonic and non-modal; i.e., there is no concept of major or minor thirds as distinctive intervals. In principle all the thirds are neutral, but in practice the thirds rendered by the singers often approximate natural major thirds (386 cents), especially at points of rest. In this manner, the principles of equidistance and harmonic euphony are accommodated within one tonal-harmonic system. For the notation of such music, a seven-line stave is most appropriate, with each horizontal line representing one pitch level.

A Ugandan Chopi xylophone measured by Haddon (1952) was also tuned to this system.

7edo can be notated on a five-line staff without accidentals. There is no distinction between major or minor; each pitch class is unique. 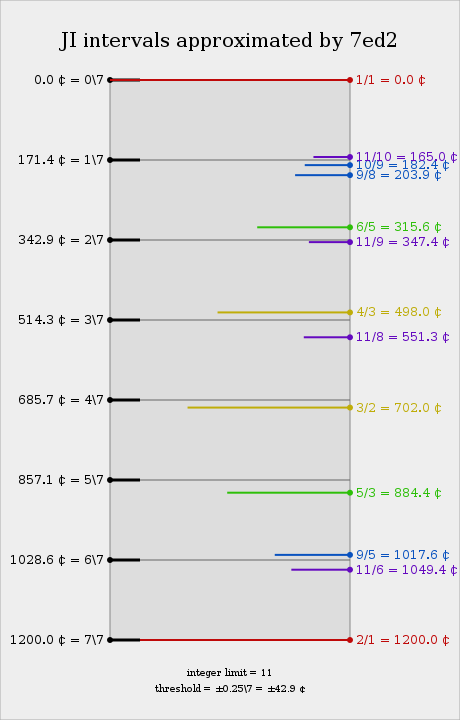 There is a neutral feel between whole tone scale and major/minor diatonic scale. The second (171.429¢) works well as a basic step for melodic progression.

The step from seventh to octave is too large for the leading tone.

It has often been stated that 7edo approximates tunings used in Thai classical music. This is a myth unsupported by empirical studies of the instruments.[1]

William Lynch proposes using numbers 1 through 7 as the nominals of 7edo with sharp signs being possible to expand to 14edo or even 21edo.

7edo is the first edo in which regular temperament theory starts to make sense as a way of subdividing the steps into mos scales, with three different ways of dividing it, although there is still quite a lot of ambiguity as each step can be considered as the sharp extreme of one temperament or the flat end of another. 1/7 can be considered the intersection of sharp porcupine and flat tetracot temperaments, as three steps makes a 4th and four a 5th. 2/7 can be interpreted as critically flat Mohajira or critically sharp amity, and creates mosses of 322 and 2221. 3/7 is on the intersection of meantone and mavila, and has MOS's of 331 and 21211, making 7edo the first edo with a non-equalized, non-1Lns pentatonic mos. This is in part because 7edo is a strict zeta edo (close to low-complexity JI for its size), and is the second edo with a good fifth for its size (after 5edo), the fifth serving as a generator for the edo's meantone and mavila interpertations.