Mike Battaglia posted the following description of a Porcupine notation to the Xenharmonic Alliance Facebook Group:

This is Paul's (and Herman's?) porcupine naming system which names the notes like this:

Or, in terms of modes that you're familiar with

Let's say we want to play around in porcupine[7]. What we need now is an accidental to represent the porcupine[7] chroma. Since the chroma for porcupine[7] is about a quarter tone, I'll use ^/v for that. (My reasons for not using #/b will become clear below). Therefore, observe

OK, great. But now let's say we want to actually use those 8 notes, and throw H back in as the note that's one 10/9 generator above "G." Now what? Well, we need a chroma for that too then, one which represents L-s in porcupine[8]. Since this chroma is more like the size of a "half step," I'll use #/b for it.

So then we get

You can even switch between the two like Igs was suggesting, and you'll find that every pitch which could ever possibly appear in the porcupine tuning system can be indexed by either one of the two notational systems. You can even use the porcupine[7] chroma over porcupine[8] names if you want and so on (but be careful notationally, it's easy to run into trouble - in the scale G H Av B C D E F G, H and Av are the same thing!).

I think this is a pretty natural way to do things if you want to use both porcupine[7] and porcupine[8].

Paul Erlich commented: I didn't come up with it but I like it because each of the four consonant triads in porcupine-7 gets a conventional spellings for its quality. D-F-A and E-G-B are minor, and F-A-C and G-B-D are major. Also the minor seventh chords D-F-A-C and E-G-B-D.

BTW with this notation system, one question is - how many lines do you use in a staff? I guess you'd have to have "staff switches" in the middle of a score if you want to switch into a porcupine[8]-oriented notation or what have you. ... Actually, forget staff changes, why not clef changes? 5 lines can accommodate 1 octave of both porcupine[7] and porcupine[8], so there you go.

William Lynch generally likes to reinvent the wheel. He proposed a system of notation for 15 EDO based on porcupine[8] as the fundamental scale.

I think it's worthwhile to explore these scales from scratch with no previous associations. I chose this old-english based alphabet as the nominals of porcupine[8]. They work for porcupine[7] as well if you leave out "ð" from the scale.

Some diagrams by Andrew Heathwaite to illustrate: 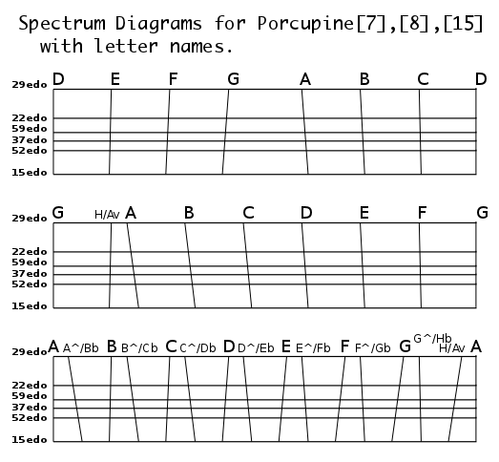 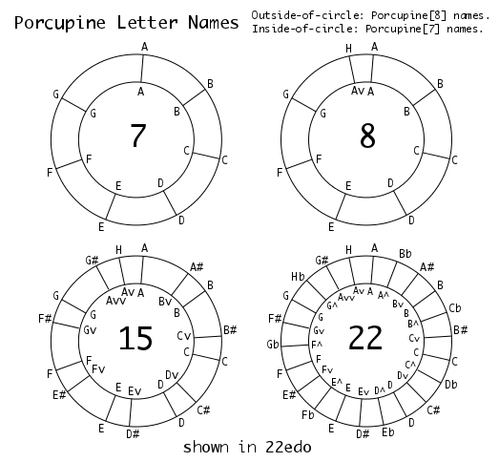 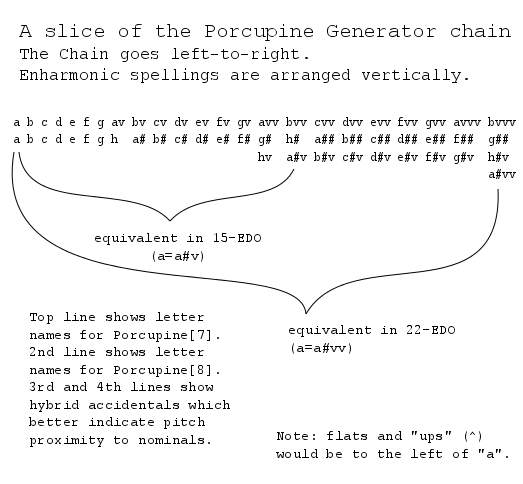 But if I start it on A natural, I get:

In 15edo it's tempered out.

In 22edo, it's one degree, which would mean, for example, A#v=A^; so we don't need it to describe all the pitches.

In 15edo, it's equivalent to ^ and # and therefore totally unnecessary.

In 37edo, it's one degree, which means that #v and bvv are in fact the same, and only one accidental would be needed.

In other Porcupinefish systems (like 59edo, for instance), it's smaller than #v, and therefore needs a distinct and preferably smaller symbol.

That's my proposal for expanding the Porcupine notation Mike Battaglia has described into the 13-limit. Does this make sense to people?

BTW with this notation system, one question is - how many lines do you use in a staff? I guess you'd have to have "staff switches" in the middle of a score if you want to switch into a porcupine[8]-oriented notation or what have you.

In C, this would be

Unlike the other proposals on this page, the notes without ups and downs still form the familiar chain of 5ths ...Eb Bb F C G D A E B F# C#..., and interval arithmetic remains unchanged. Staff notation is as usual, with the addition of up and down accidentals before certain notes.

See the ups and downs page for an explanation of the chord names.