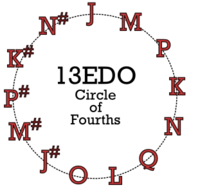 I began studying and playing with 13 Equal Temperament (13edo) after hearing about the wonderful scales it contained. The scales of 13 edo rival that of the diatonic scale in 12edo. Most people complain "13 EDO sounds like crap. It's a horrible tuning or at least one that isn't capable of warm, happy music". Playing in 13 Edo for a few days shows this to be a total lie. 13 Equal is an odd creature, it requires vastly different approaches than meantone tunings like 19 or 12 because it lacks a decent perfect fifth. But that's ok, we don't the need the fifth to make nice harmony, the fifth in 13 edo takes on a much different role as a chord extension and isn't considered part of the bass harmony. (More on that in a minute) Not only that, but 13 edo also has a weird fourth which makes it appear to be a bad tuning to a noob. However, I have recorded my ideas on harmony, melody, scales and more on the tuning here.

I call 13 EDO "The tuning from a parallel universe" It's so vastly unique from 12 EDO and lacks the essentials of western harmony, the perfect fifth and perfect fourth. Although there is a fourth and fifth, they are entirely different beast than the 12 EDO ones, but this is a good thing because the trade off is sounds that have a dreamy like quality as well as other unique sounds. 13 EDO literally sounds like something from another world, it's different and exotic but at the same time, it can be warm and somewhat modal sounding if played right. If played wrong, it can sound really, really horrible; try it, try playing a classical Bach piece in 13 edo, it sucks. 13 EDO gives us the ability to take a new approach to melody and harmony and start fresh to give something really fun to play around with. Though be warned, it requires a bit of a learning curve to hear it, learn to follow its odd melodic properties as well as harmonic resolutions. However, I believe it's an amazing tuning if you just give it some love :)

What is 13 Equal Temperament?

13 Equal temperament is nothing more than dividing the octave into 13 equal parts rather than the usual 12, you may think that this doesn't change much but that's not the way musical frequencies work. Going from 12 to 13 breaks down almost everything from traditional music and it doesn't work, starting from 13 is like starting from scratch with only few prepared ingredients. I like this about it because we get to craft a musical world from the ground up, which is always fun. Since 13 ET has no perfect fifth, we need to find another interval that we can use as our most basic consonance as in an interval to somewhat replace the role of a fifth. The interval I believe that works the best for fairly western like music is the major ninth/major second. It's strong and similar to a fifth in flavor so I like it. This means for simplicity, we can refer to the major ninth as a "perfect ninth" and its inversion the "perfect whole tone".

However, there are more intervals that could work such as 11/8 and 21/16 which have good crunchy sound to them as well. For general purpose, 9/8 "Major Ninth" and 21/16 "Sub Eleventh" are excellent intervals for scale generation. 9/8 produces a 7 tone, Archeotonic scale and 21/16 produces an 8 note, Oneirotonic (octatonic) scale. We'll talk more about scales in a minute but the point is, is that both intervals are quite essential to tonal 13 edo.

With any tuning, we always can start just by playing around chromatically to find some cool ideas. However, playing music in an unfamiliar tuning is much more fun if you have something to work with rather than just BANGING all around all over the place. Scales make composing melody simpler as well as gives us something to organize the tuning in a way that makes sense to our brain. There are at least a few good MOS scales in 13 edo that include not only good melodies and avoid having two small steps in a row, but also contain a wealth of harmonic resources. In a nut-shell, they can be used as a tonal foundation similar to the way 12 EDO uses the major scale. In 13EDO, this is the scale that we will base our notation on:

This scale is technically in the xen world called "father[8]" but we will call it "Dylathian" which is its name from another world... haha just kidding but that is what we call it. The scale is somewhat similar to a major scale but at the same time, very different. The first most obvious thing is that the scale has eight notes instead of the usual seven which makes it very cool. This scale is what I consider the basis for 13 edo harmony and melody meaning, you can go outside the scale all you want but this scale gives us some kind of guide to follow when playing in 13.

So how do we write this scale out in letter names? How do we notate it? Well the problem is, traditional musical alphabet does a poor job at representing 13 notes an octave even with added notes. There are various approaches to notating 13 ET with regular note names such as including a new letter H displacing everything on the musical staff, or adding an extra sharp somewhere. Overall, I found these techniques to be overly confusing as my brain being so accustomed to 12 equal temperament notation is trying to liken it to 13 which will not work. Looking at a staff you've seen for a long time and trying to displace the letter names to notate it where A now means H is like trying to relearn numbers to where 7 now means 8 and 8 means 9. It's extremely counterintuitive and confusing. So what's the solution? Well, some may argue it's unnecessary but I propose an entirely new set of letters producing a new musical alphabet. This is the best way for me because I won't get confused with trying to look at an A and think that it's H, that's just too insane. But couldn't we just notate it with numbers instead? Sure, we could do that with 12 as well, why don't we? I dunno, but I don't really care for numbers, there's something about pairing a sound with a letter vs. pairing it with a number.

Because we're trying to avoid being confused with A through G, let's avoid those letters altogether for a new set of letters. Let's use JKLMNOPQ to represent the 8 pitches of the Dylathian scale. As for the rest of the notes in 13, we simply put sharps/flats between some of the letters. So what reference pitch do these letters apply to? Well for simplicity we could say that J is approximately the same pitch as C, but the audio example of the Dylathian scale I gave you starts on an F, so let's just assume J in 13 edo is close to an F in 12 edo so it's like between F and F# in 12 edo.

J-J#-K-K#-L-M-M#-N-N#-O-P-P#-Q-J or just the Dylathian scale with holes: J ' K ' LM ' N ' OP ' QJ. In order to help visualize this, I made a piano layout similar to the 12 edo one - except this layout is a bit impractical in real life because it makes octaves a whole step wider meaning you would have to stretch your hand quite a bit. However, it works well for visualization purposes. 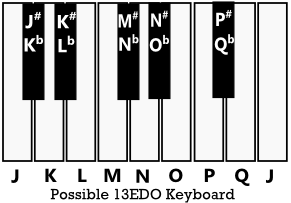 Moving on, we can then take our new musical alphabet to notation by making what is normally middle C, J which again is not C, but about a fourth from a normal C. However, something that is both a tad confusing and easy to know, is that octaves are now line to line or space to space. This is because the major scale has 7 notes in it, but the Dylathian scale has 8 notes in it which means we can't do it the same way. This is very easy to get used to though, and actually makes learning a new alphabet 10 times easier as now J is always on a line and K is always on a space! The notes appear the same everywhere on the staff.

This system is not very difficult to learn if you already know how to read sheet music normally. You just have to know where the notes are on the staff and know which ones are lines and which ones are spaces. A simple mnemonic device is extremely helpful in doing this:

The notes on the Spaces are: K M O Q Kids Might Openly Question

From the examples of the Keyboard Layout and the Sheet music notation, we can start to see a pattern in the Dylathian scale. If you remember how to construct a major scale from basic music theory, you should recognize the WWhWWWh formation. Well we can do the same thing in 13 edo and see that the Dylathian scale is built by WWhWWhWh or LLsLLsLs if you prefer. Looking at it more, we can see that while the major scale in constructed of two tetrachords, the Dylathian scale is composed of 1 pentachord and 1 tetra chord. Now this information isn't really that important but it helps your brain wrap around the idea of an 8 note diatonic scale by thinking of the scale in terms of a set of 4 and a set of 5, that way you can kind of feel the rhythm of the scale.

Listen to the scale JKLMNOPQJ again:

We can also look at the entire chromatic scale in 13 Edo:

Dylathian is not the only good scale in 13 edo. There is actually a peculiar sounding seven note scale that is really nice too. However, its harmonic structure is a tad boring as there is only one small step and everything else is large steps. It looks like this LLLLLLs. This scale is amazingly beautiful regardless of its bland structure, it resembles the sound of Lydian or the whole tone scale in 12 edo, but it's more, tonal? I guess so. It's quite a neat sound and I consider it to be a really good scale. The reason I didn't pick this scale to be the naturals of 13 edo is because its structure makes notating 8 tone scales ridiculously impractical; however, notating this scale with an 8 note scale as the naturals makes things easier.

On J, the scale is J K L M# N# O# Q J. Notice how this time P is omitted? That's because it's a seven note scale; notating this scale is a little weird because we use 8 natural notes to notate a seven tone scale, just as it's awkward notating a 6 note scale with 7 naturals. This scale is very beautiful and works quite well for composition and melody. It's somewhat happier than the Dylathian scale but somewhat awkward as well.