From Xenharmonic Wiki
(Redirected from 8-edo)
Jump to: navigation, search

8-edo forms an odd and even pitch set of two diminished seventh chords, which when used in combination yield dissonance. The system has been described as a "barbaric" harmonic system; even so, it does a good job representing the just intonation subgroup 2.11/3.13/5, with good intervals of 13/10 and an excellent version of 11/6.

This is a heptatonic notation generated by 5ths (5th meaning 3/2). Alternative notations include pentatonic 5th-generated, octotonic, and heptatonic 2nd-generated.

Octatonic: A B C D E F G H A (every interval is a generator)

Ups and downs can name any 8-edo chord. Alterations are always enclosed in parentheses, additions never are. An up, down or mid immediately after the chord root affects the 3rd, 6th, 7th, and/or the 11th (every other note of a stacked-3rds chord 6-1-3-5-7-9-11-13). 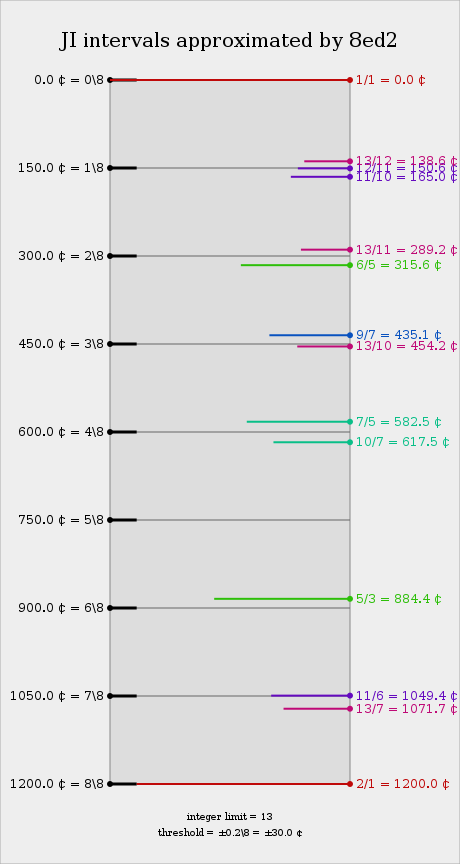 For those who use the new tuner Lingot, which accepts scala files, or for anyone else, here is a .scl file of 8 EDO 08-EDO.scl

Comets Over Flatland 7 by Randy Winchester

News To Me Jake Sherman