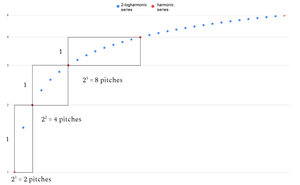 A subset of the 2-logharmonic series is explored by Robert P. Schneider in his 2013 paper A Non-Pythagorean Musical Scale Based on Logarithms.

We can call this approximating series the matharmonic series.

Sound of the logharmonic series as a timbre

The usual harmonic series can be thought of as being derived from a periodic timbre, such as a sawtooth wave. In general, we can derive the sawtooth wave as

We can change the "rolloff" on the harmonics to get different derived waveforms which instead have the partials rolling off at a rate of [math]n^s[/math]:

As [math]s[/math] increases, so does the rolloff (and hence the brightness of the timbre), so that as we get [math]s \to \infty[/math], our sawtooth wave goes to a sine wave.

If we instead replace our [math]\sin(nt)[/math] term with [math]\sin(\log(n) t)[/math], we instead get the Riemann Zeta function, treated as an audio sound wave:

This is easy to see using the Dirichlet series representation:

Note that the above only converges if we have [math]s \gt 1[/math], e.g. if the rolloff is greater than that of a sawtooth. However, we can use the analytic continuation of the Riemann Zeta function to procure a function even for [math]s \lt 1[/math]. Here is an example of the critical line of the Riemann zeta function (e.g. [math]s = 0.5[/math] played as a sound wave):

(Mike Battaglia's note: I believe this is technically the real part of the critical line, which sounds basically the same as the imaginary part, only with the phases shifted from sine waves to cosine waves.)