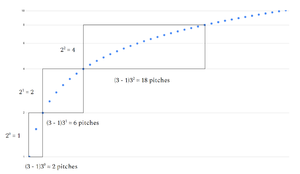 For example, the log-base-3-of-2-powharmonic series, where [math]p = log_{3}2[/math], will — like the harmonic series — and by virtue of being "of 2" — include every octave (multiple of 2) of the fundamental. However, instead of the counts of pitches per octave increasing by a factor of 2:

An equality involving exponents and logarithms helps us understand why:

Breaking this down step by step:

Any powharmonic series has infinite equivalent ways of being expressed. We can visualize the equivalences with the following coloration of powharmonic space: 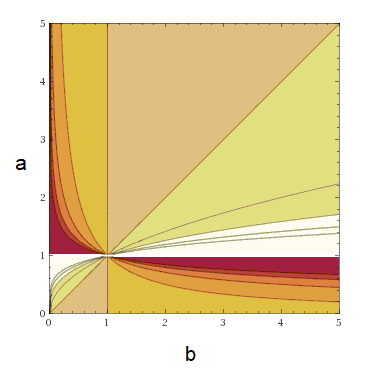 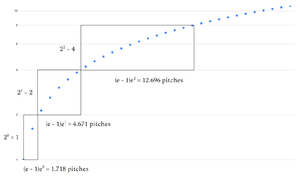 Irrational values can be used as [math]a[/math] or [math]b[/math].

In particular it may be of interest to use [math]e[/math] as [math]b[/math] — in other words, to use a natural logarithm.

For example, the ln-of-2-powharmonic series fits [math]e[/math] times as many many more pitches into each next octave as the previous octave. Because [math]e[/math] is irrational, however, no integer multiples of the octave will ever be reached.

In fact, this series is equivalent to the example given in the introduction, because [math]ln(2) ≈ 0.69314718056[/math], and if any powharmonic series were to qualify to be referred to for short as "the" powharmonic series, this would be the one.

Perhaps even more interestingly, a ln-of-a-powharmonic series can be approximated by moving by steps of increasing equal divisions of [math]a[/math].

In yet other words, the definition of an a-edharmonic series is:

We cross-pollinate the abbreviation for "equal division" with affiliation for the pronunciation of "enharmonic" to get the name "edharmonic series".

The 0th harmonic number is not defined, however, if it were, it seems reasonable to assume it would be defined as 0; in other words, the first step of the harmonic series would be to add [math]\frac11[/math] to 0.

In the case of the (2-)edharmonic series, doing so brings it closer in similarity to the (musical) harmonic series; the first step is exactly an octave, the second step a fifth (701.96¢ vs 600.00¢), the third step a fourth (498.04¢ vs 400.00¢), the fourth step a third, (386.31¢ vs 300¢), etc. This similarity could be useful when using the entire series as a scale rather than drawing scales from it. We therefore propose referring to this variation as the "emulatory edharmonic series", because it emulates the harmonic series.