13edo: 13 equal divisions of the octave

13edo refers to a tuning system which divides the octave (frequency ratio 2:1) into 13 equal parts. It is the sixth prime edo, following 11edo and coming before 17edo. The steps less than 600¢ are narrower than their nearest 12edo approximation, while those greater than 600¢ are wider. This allows for some neat ear-bending tricks, whereby melodic gestures reminiscent of 12edo can quickly arrive at an unfamiliar place.

13edo can also be notated with ups and downs. The notational 5th is the 2nd-best approximation of 3/2, 7\13. This is 56¢ flat of 3/2, and the best approximation is 36¢ sharp, noticeably better. But using the 2nd-best 5th allows conventional notation to be used, including the staff, note names, relative notation, etc. There are two ways to do this. The first way preserves the melodic meaning of sharp/flat, major/minor and aug/dim, in that sharp is higher pitched than flat, and major/aug is wider than minor/dim. The disadvantage to this approach is that conventional interval arithmetic no longer works. e.g. M2 + M2 isn't M3, and D + M2 isn't E. Chord names are different because C - E - G isn't P1 - M3 - P5.

The second approach preserves the harmonic meaning of sharp/flat, major/minor and aug/dim, in that the former is always further fifthwards on the chain of fifths than the latter. Sharp is lower in pitch than flat, and major/aug is narrower than minor/dim. While this approach may seem bizarre at first, interval arithmetic and chord names work as usual. Furthermore, conventional 12edo music can be directly translated to 13edo "on the fly". 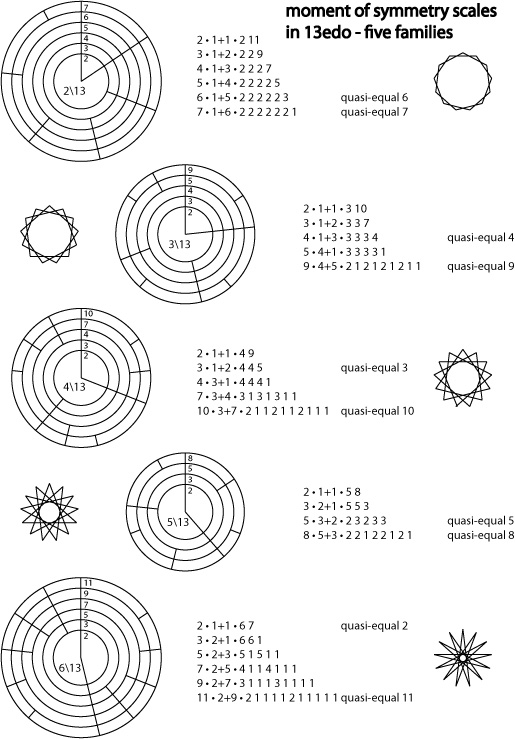 ~diagram by Andrew Heathwaite, based on horagrams pioneered by Erv Wilson

Another neat facet of 13-EDO is the fact that any 12-EDO scale can be "turned into" a 13-EDO scale by either adding an extra semitone, or turning an existent semitone into a whole-tone. Because of this, melody in 13-EDO can be quite mind-bending and uncanny, and phrases that begin in a familiar way quickly lead to something totally unexpected.

Contrary to popular belief, consonant harmony is possible in 13-EDO, but it requires a radically different approach than that used in 12-EDO (or other Pythagorean or Meantone-based tunings). Trying to approximate the usual major and minor triads of 12-EDO within 13-EDO is usually a disappointment if consonance is the goal; 0-3-7, 0-4-7, 0-3-8, and 0-4-8 are all rather rough in 13-EDO. Typically, the most consonant harmonies do not use a "stack of 3rds" the way they do in 12-TET, since the strongest dissonances in 13-EDO are near the middle of the octave (degrees 6, 7, and 8). Instead, a stack of whole-tones, or a mixture of whole-tones and minor 3rds, often yields good results. For example, one way to view 13-EDO is as a subgroup temperament of harmonics 2.5.9.11.13. It actually performs quite admirably in this regard, and a chord of 0-4-15-19-22 (approximating 4:5:9:11:13) sounds very convincing. An even larger subgroup is the 2*13 subgroup 2.9.5.21.11.13, on which 13 has the same tuning and commas as 26et.

Other approaches explored by specific composers and theorists are outlined further down, in the context of more complete tonal systems.

Notational and Compositional Approaches to 13edo

13edo has drawn the attention of numerous composers and theorists, some of whom have devoted some effort to provide a notation and an outline of a compositional approach to it. Some of these are described below.

Modes and Harmony in The Archaeotonic Scale

A 7-nominal notation is proposed, using the letters A-G. The "C natural" scale is proposed to be degrees 0-2-4-6-8-10-12-(13), with the note "C" tuned to a reference pitch of concert middle C. The modes are laid out in the following table, excerpted from an unfinished paper on 13edo.

There may be other concordant harmonies possible in this scale that do not represent segments of the overtone series; further exploration is pending.

Modes and Harmony in the Oneirotonic Scale

Here an 8-nominal notation is proposed, using letters A-H. The "C natural" scale is proposed to be degrees 0-2-4-5-7-9-10-12-(13), with the note "C" tuned to concert middle C. The modes are laid out in the following table, excerpted from an unfinished paper on 13edo.

There is a great number of potential consonant harmonies in this scale. A dedicated article on harmony and tonality in the oneirotonic scale is forthcoming.

The Kentaku (aka William Lynch) Method for Octatonic Notation

Normally, 13edo can be notated by adding an accidental between E and F. For some reading the same staff with the same letters but in different places can be mind boggling and lead to confusion. That's why some have recommended different options.

13edo may be better suited to be notated by using the 8 notes of the MOS father[8] as the notes except that similarly to meantone, the 4th mode of Father[8] is the default "Basic" mode of 13edo and is notated with new letters. A new set of letters may benefit by giving 13edo a fresh perspective. William Lynch proposes using the letters JKLMNOPQ as the notes of the 4th mode of Father[8] with J being an 11/8 from a normal C, in order to give it a more personal identify rather than hearing it as C. The remaining letters of 13 edo are notated with sharps and flats like 12edo. The whole alphabet is written J-J#-K-K#-L-M-M#-N-N#-O-P-P#-Q-J . There are no accidentals between LM, OP, and QJ. The idea behind using the 4th mode rather than the 1st is that this mode contains a warmer sounding shape because it has a flat sixth instead of a natural one so William has chosen this to be the default mode rather than Dylathian.

This new approach simply modifies the way 13edo is systematized and notated but is based on the exact same 8 tone scale that Cryptic Ruse uses.

Notation written on the staff looks nearly the same as 12edo notation, except that because there are 8 letters instead of 7, the notes offset themselves to where space-to-space and line-to-line are now octaves rather than line-to-space. This makes learning the system much easier because a letter that is on a line is always on a line.

Also, this approach allows for a circle of fourths to be produced: 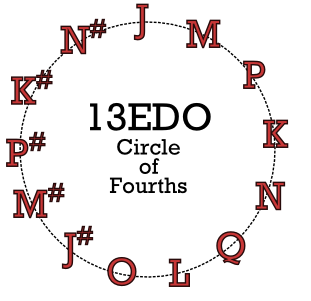 Listen to Dylathian on J: (F#)

The 5L+3s scale (Oneirotonic) can be mapped to the standard keyboard effectively, although somewhat awkwardly. Consider the sequence of 730-cent intervals that it derives from: 1 6 11 3 8 (13) 5 10 2 7 12 4 9 1/1. One of these must be absent, so it might as well be the last. So, there are at most five of the full octatonic scales on different keys. Of the four mappings that keep the major pentatonic on the white keys, which ironically look like ordinary minor-pentatonics, the latter which begins on B might be the most straightforward to learn and use.

The archaeotonic tonality is much simpler to deal with: you just leave out a tone and remember which one. Although, for diatonic use it may be more convenient to put the missing tone between E/F or B/C to keep it on the white keys, with the remaining small step where it looks like it should be.

Comets Over Flatland 11 by Randy Winchester

Stare (into The Sun) play by Jon Lyle Smith

Prelude for Synthesizer in 13 Equal by Chris Vaisvil

For Claudi by Margo Schulter