Muddling refers to a process of mapping one periodic scale onto another one; the scale thus produced is a muddle. By periodic scale is meant a scale that repeats "at the something" (octave, tritave, something else). There are two necessary components: a parent scale and a target shape, or simply "parent" and "target". The parent scale can be any periodic scale at all; the target scale is not exactly a scale -- it's the outline or shape of a scale -- and it must be defined in terms of units or degrees which comprise the steps. If the period is an octave, this means the target scale will be a subset of an EDO.

The simplest sort of muddle is a MOS Muddle, which is a sort of second-order MOS Scale and is useful for generating usable subsets of larger MOS scales and for navigating Regular Temperaments. This article will mostly deal with MOS muddles, but it should be remembered that this process can be generalized to arbitrary sequences of steps.

In the case of a mos muddle, both the target and parent describe some sort of mos. Typically, the parent scale is large enough from which a subset of its notes is musically useful, whereas the target describes a grouping of steps from the parent rather than an edo. As a running example, let's use 22222223 (1L 7s, step ratio 3:2) as a parent scale and 12122 (3L 2s) as a target shape.

Applying the construction rules to our example results in the parent's steps being grouped as such: (2)(22)(2)(22)(23). This results in a muddle scale with a step pattern of 24245 -- not a mos since it has more than two step sizes. This new scale has melodic properties similar to that of the target, but has other properties that fall outside the target; when viewed under regular temperament theory, for example, both the target and muddle fall under different temperament families.

Another way to conceptualize a muddle is to consider that the parent scale already describes a subset of an edo (17edo in our example), and the target describes finding a subset of that subset.

Starting with a different mode (or rotation) of either the parent or target scale results in a different muddle altogether; see the examples below.

It is also possible for muddling to result in a mos, even if both the parent and target are mosses; see the examples below.

To continue with our example of a parent scale of 22222223 and a target shape of 12122, here are all the muddles that can result from different rotations of the parent scale:

Here is a diagram showing the muddles available with a 55755757 parent scale (Sensi[8] in 46edo) and a 12122 target scale. Note that this combination produces MOS scales as well as muddles. 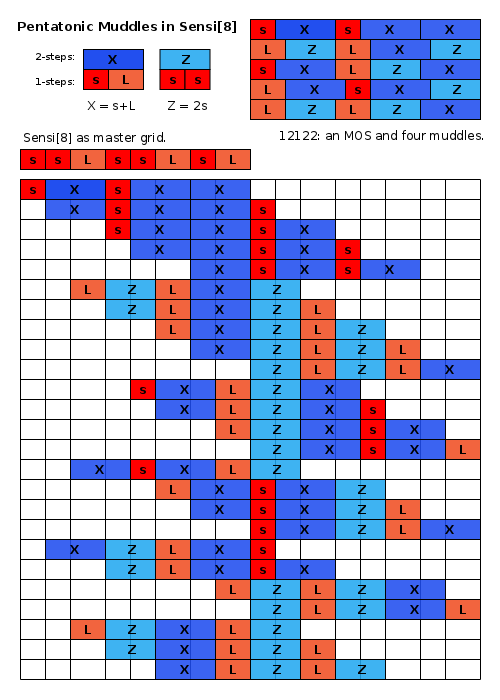 A muddle that's itself a mos

Rotating either scale can result in a muddle scale that is not a mos, in that it has more than two step sizes. For example, rotating the target to 12121 instead results in a mos muddle with a step pattern of 23241.

With the exception of trivial muddles, mos muddles always have more than two sizes of step -- either three or four sizes. Whereas MOS scales have two varieties of interval for each interval class (eg. a "large step" and a "small step"), muddles have potentially two varieties within each variety (eg. two sizes of "small step" and two sizes of "large step"). Parent scales that are close to equal (eg. maximally even scales) will produce muddles that are closer in sound to the target scale. Larger parent scales contain more potential muddles than smaller ones, just as larger EDOs contain more potential MOS scales than smaller ones.

MOS muddles seem to be as old as MOS, although the name "muddle" is new. Page six of Erv Wilson's seminal article on MOS scales shows a 17-tone MOS subset of 41edo as "parent scale" and a 7-tone MOS pattern as "target scale shape". They are also present in the work of Kraig Grady, who prefers the term "bi-level" (see this blog entry and this one). The word "muddle" comes from Gene Ward Smith.

As mentioned at the beginning, in a muddle, the parent scale can be any kind of periodic scale at all, including but not limited to MODMOS scales, MOS Cradle scales, other muddles, scales of temperaments with rank higher than 2, Just Intonation scales, etc. The target scale is a little less flexible, but it could be at least a MODMOS scale, a MOS Cradle scale or any other MOS subset or subset of a periodic equal-step scale. It's just important that the total number of "units" in the target scale (eg. the MOS Cradle 23132 has 2+3+1+3+2=11 units) be the same as the number of tones in the parent scale (thus the 23132 target scale must be applied to a scale of 11 tones).