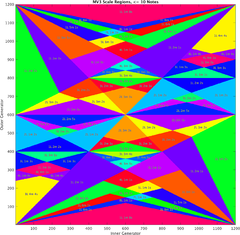 Plot of at-most-decatonic MV3 GO scale regions in the plane.

More formally, a cyclic word S (representing the steps of a periodic scale) of size n is GO if it satisfies the following properties:

More generally, we say that a scale is m-GO if both of the following hold:

An m-GO scale can be interpreted as a scale in a rank-(m + 2) regular temperament, with basis p (period), g, δ1, ...,δm (though the specific tuning used may be of lower rank).

[Note: This is not true with SGA replaced with GO; blackdye is a counterexample that is MV4.]

Assuming SGA, we have two chains of generator g0 (going right). The two cases are:

By applying this argument to 1-steps, we see that there must be 4 step sizes in some tuning, a contradiction. Thus g1 and g2 must themselves be step sizes. Thus we see that an even-length, unconditionally SV3, GO scale must be of the form xy...xyxz. But this pattern is not abstractly SV3 if n ≥ 6, since 3-steps come in 4 sizes: xyx, yxy, yxz and xzx. Thus n = 4 and the scale is xyxz. This proves (3).

if a step is an odd number of generators (since the scale size is odd, we can always ensure this by taking octave complements of all the generators). The first two sizes must occur the same number of times. This proves (2).

In aX bY bZ, consider (i+j)-steps (representing the generator) with: (1) the maximum possible number of Y’s (at least 2 more than the # of Z's), (2) the maximum number of Z’s (at least 2 more than the # of Y's), or (3) an intermediate number of Y’s and Z’s between the two or (4) (the preimage of) the imperfect generator. Since a + 2b >= 5, there are at least 4 perfect generators, so there must be at least one of each of (1), (2), and (3), giving a contradiction to SV3. [Whenever the boundaries of the (i+j)-step are moved within S, the numbers of Y's and Z's change one at a time and reach a maximum at some choice of the boundary and a minimum with another choice, guaranteeing that intermediate values are reached.]

For (6), odd-numbered SGA scales are Fokker blocks (in the 2-dimensional lattice generated by the generator and the offset). To see this, consider the following lattice depiction of such a scale:

and use the vectors (-1, 2) and (ceil(n/2), 1) as the Fokker block chromas. A Fokker block has the property that tempering out by each of the chromas gives two mosses. These correspond to two of the temperings X = Y, Y = Z and X = Z. The third tempering follows by symmetry (by taking the other chirality).

For (7), consider the mos aX 2bW as chunks of X separated by W (tempering Y and Z together into W). Eliminating every other W turns it into a mos, because the sum of sizes of consecutive chunks of X (1st chunk with 2nd chunk, 3rd with 4th, ...) must form a mos. This is because the chunk sizes of X form a mos, and taking every kth note of an n-note mos where k divides n yields a mos. Since the result of setting X = 0 is the mos bY bZ, S is elimination-mos.

Suppose that a periodic scale satisfies the following:

Then the scale is SGA.

Assume that the generator is a k-step and k is even. (If k is not even, invert the generator.) On some tonic p we have a chain of ceil(n/2) notes and on some other note p' = p + offset (not on the first chain) we'll have floor(n/2) notes.

By modular arithmetic we have rk mod n = k/2 iff r = ceil(n/2) mod n. (Since gcd(2, n) = 1, 2 is multiplicatively invertible mod n, and we can multiply both sides by 2 to check this.) This proves that the offset, which must be reached after ceil(n/2) generator steps, is a k/2-step, as desired. (If the offset wasn't reached in ceil(n/2) steps, the two generator chains either wouldn't be disjoint or wouldn't have the assumed lengths.)

Proposition 3 (Properties of even GO scales)

GO scales of even size have the following properties:

Theorem 4 (PWF implies SV3 and either GO or abacaba)

Let S(a,b,c) be a scale word in three Z-linearly independent step sizes a, b, c. Suppose S is PWF. Then S is SV3 and has an odd number of notes. Moreover, S is either GO or equivalent to the scale word abacaba.

Suppose S has n notes (after dealing with small cases, we may assume n >= 7) and S projects to single-period mosses S1 (via identifying b ~ c), S2 (via identifying a ~ c) and S3 (via identifying a ~ b). Suppose S1's generator is a k-step, which comes in two sizes: P, the perfect k-step, and I, the imperfect k-step. By stacking k-steps, we get two words of length n of k-steps of S2 and S3, respectively. These two-"step-size" words, which we call Σ2 and Σ3, must be mosses, since m-steps in the new words correspond to mk-steps in the mos words S1 and S2, which come in at most two sizes. Both Σ2 and Σ3 are single-period mosses, since (k, n) = 1.

(Note: We say “assume” as shorthand for either “assume without loss of generality” or “assume after excluding other possibilities”.)

Assume that S2's generator is also a k-step, and that Σ2's I is located at index n. Then Σ1 and Σ2 are the same mos pattern (up to knowing the order of the step sizes) and even the same mode:

Assume the L of S1 (it could be s, but it doesn’t matter) is the result of identifying b and c, and all instances of s in S1 come from a. Then the steps of S2 corresponding to the L of S1 must be either all b’s or all a~c’s, thus these steps are all b’s in S (otherwise they would be identified with the a, against the assumption that S1 and S2 are the same mos pattern and mode). So S has only two step sizes (a and b), contradicting the assumption that S has exactly three step sizes. This shows that the maximum variety of S must be at least 3, and that P has at least two preimages in S.

Since neither are multimosses, and at least one of μ and (μ∓1) are even, it is now immediate that n is odd.

We can assume that the first k-step in Σ is Q:

We have three cases to consider:

For Λ2 to be a mos, the first occurrence of R must be at either f = floor(n/2) or ceil(n/2). We may assume that it is at f; otherwise flip the chain and reindex the words to start at 2f.

We need only consider stacks up to f-many k-steps. Either:

These give exactly three distinct sizes for every interval class. Hence S is SV3.

In this case S has two chains of Qs, one with floor(n/2) notes and and one with ceil(n/2) notes. Every instance of Q must be a k-step, since Q = αa + βb + γc is the only way to write Q in the basis (a, b, c); so S is well-formed with respect to Q. Thus S also satisfies the generator-offset property with generator Q.

In this case we have Σ = QRQR…QRI, thus S satisfies the generator-offset property.

Suppose a step of S is reached by stacking t-many k-steps. We have three cases after accounting for equave complements:

The remaining cases are all impossible because they imply y - x >= 2:

If a 3-step size scale word ax by cz is

then it is GO (and therefore SGA). (a converse to Proposition 1)

By Theorem 4, this conjecture would follow from proving that such scales are PWF.

If a 3-step size scale word that is ax by cz is abstractly SV3, then two of a, b, c are equal.

Given any two generators, we can iterate them to any number of notes and see what the maximum-variety of the resulting scale is. In particular, we can look at those scale sizes which are MV3, and thus compute the MV3 sequence for the pair of generators (similar to the "MOS sequence" one can compute for one generator). Thus, for any pair of generators, we can form the associated sequence of increasingly large MV3 scales.

Surprisingly, for almost all pairs of generators, this sequence seems to terminate after some (usually relatively small) scale. That is, if we simply take all possible pairs of generators between 0 and 1200 cents, and for each pair we compute the MV3 sequence for all generator pairs up to some maximum N, such as 1000, we can easily see that most points will have only a few entries in it, after which no MV3 scales are apparently generated. It would seem to be true that as the two generators get closer and closer in size, the MV3 sequence gets longer and longer, until when the two generators are equal you have an infinite-length sequence (corresponding to MOS).

It is pretty easy to see this behavior is true if we simply compute the MV3 sequences up to any very large N, far beyond the scale sizes we typically use in music theory, but it would be good to have a proof.

This heading has those open questions for which no conjecture has yet been formed either way. (These can be updated as necessary)