To practically use more complex tunings such as microtemperaments and mega-edos, the software tuning scheme where tunings differ by MIDI channels may be of help.

In theory, 128 pitches per channel × 16 channels = 2048 distinct pitches are available in a single instance of the tuning software. Here will be discussed how to actually enable all of them.

Octave per channel is a recommendable form of this software tuning scheme, where each subsequent channel increments the pitches by an octave. Each channel, in turn, should cover at least the entirety of an octave. For edos, that implies up to 128edo with a range of 16 octaves. One probably does not need that range but even finer edos. The solution is to make each channel cover half an octave instead, with a range of 8 octaves. One way to do it is to make a channel cover every other edostep, and make another channel increment its pitches by a single edostep; repeat that pattern for each octave. How the channels are arranged is up to the user. For example, one may make channels 1–8 differ by octaves and channels 9–16 increment them by an edostep, or may make odd channels differ by octaves and even channels increment them by an edostep. A maximum of 256edo can be used, but it is particularly beneficial to hemicomma-size edos, where a common comma (such as the syntonic comma or the septimal comma) is tuned to two edosteps.

As of January 2022, not many plugins support this tuning scheme. For one, Surge notably supports it by enabling Use MIDI channel for octave shift[1]. Otherwise, it is possible to achieve it by setting up the circuit in the DAW without support of the plugin itself. The figure below shows an example of using the Patcher plugin in FL Studio. It is, essentially, multiple instances of the same plugin, so it unfortunately takes up a huge amount of memory. 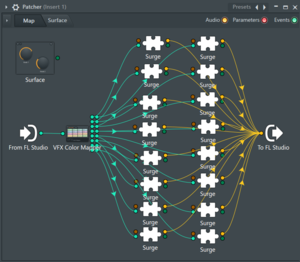 Tuning per channel with Patcher in FL Studio
Retrieved from "https://en.xen.wiki/index.php?title=Tuning_per_channel&oldid=84252"
Categories: