There are many chords on the Kite Guitar to explore, but the obvious place to start is with those of intervallic odd-limit 9 or less. These chords are mostly subsets of the 4:5:6:7:9 pentad or the 9/(9:7:6:5:4) pentad. Thus most of these chords can be classified as either harmonic or subharmonic. Chords such as vM7, ^m7, vm7 and v6 are classified as stacked chords, because they are formed by stacking complimentary 3rds. Many chords fall outside these 3 categories.

Homonyms are to chords what modes are to scales. C6 and Am7 are homonyms (same notes, different root). In theory, every tetrad has 3 other homonyms, but in practice many are too implausible (e.g. Am7 = G6/9sus4no5). Most tetrads and pentads have at least one plausible homonym.

These tables list all chords of odd-limit 9, plus a few with downmajor 7ths that are odd-limit 15. The example chords are arbitrarily rooted on C. The chord shapes are written in tablature, using fret numbers. The root is placed arbitrarily on the 4th fret, even though C is not on the 4th fret. In these tables, the interval between open strings is always a downmajor 3rd. This makes the Kite guitar isomorphic, thus a tab like 4 6 3 5 can start on the 6th, 5th or 4th string, and of course any fret of that string. A skipped string is indicated by a period. Alternate fingerings are possible, especially for 2-finger and 3-finger chords.

These tables are fairly exhaustive. Don't get overwhelmed! The most essential chords are in the first two tables (triads and seventh chords). Here's a printer-friendly chart to get you started, with and without fingerings: 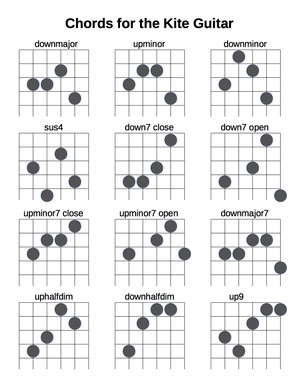 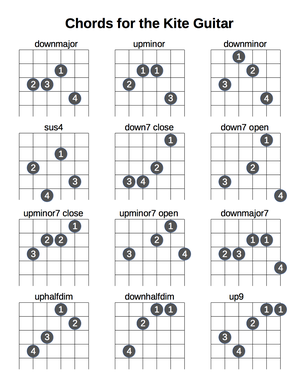 The alternate names for the voicings are explained in the next section. Other voicings are possible; these are just the most convenient ones. The upmajor chord is a particularly dissonant triad. See "Innate-comma chords" below for augmented triads. Added ninths are shown in parentheses. Adding a major 9th (ratio 9/4, example note D) to the up or down triad increases the intervallic odd-limit only slightly if at all. The up chord is arguably improved by adding a 9th. The two sus chords have another homonym, the dom7sus4 chord, which is discussed below. The cryptic superscripted-circle symbol for diminished can be replaced with the far more intuitive and obvious lower-case d.

It's generally impossible to voice 7th chords in 1st, 2nd or 3rd inversion close voicings, because the 7th usually occurs on the same string as the 8ve. One exception is the dom7sus4 chord. Its 7th shares a string with the 5th, so the 5th is generally omitted.

9ths are shown in parentheses. Adding a major 9th (ratio 9/4, example note D) to any of the first 4 tetrads increases the intervallic odd-limit only slightly if at all. The up-7 chord is arguably improved by adding a 9th. The no3, no5 and no7 (i.e. add9) versions of the ^9 and v9 chords are all 9-odd-limit chords.

The wordy min7b5 and the illogical half-dim can be replaced with dim add7. The cryptic superscripted-circle-with-slash symbol becomes either ^d^7 or vdv7.

The up-6 chord is particularly dissonant, unless voiced as its homonym, the vm7 chord.

If you play a 7th chord in close root position on the upper 4 strings, you can drop the 3rd of the chord down an octave to get a high-3-5 voicing of the corresponding 6th chord.

We've covered every chord that maps to a JI chord of intervallic odd-limit 9. However there are many Kite guitar chords that don't, although their individual intervals do. These chords are called innate-comma chords aka essentially tempered chords. Such chords often have a mysterious sound. Almost every easily reachable interval on the fretboard is odd-limit 9. The only exceptions are ~4, ~5, vM7, ^M7, vm9 and ^m9. Thus the majority of random Kite guitar chord shapes are intervallic odd-limit 9.

The downaddflat5 chord Cv,b5 (odd-limit 15) has both a perfect and a diminished 5th. This chord is best voiced low-5. In other voicings, the two 5ths are on the same string, and one must play a riff that alternates between the two (indicated as 1/3 in the tab, 1st and 3rd fret).

The Ruyoyo comma implies an augmented chord because it lets 5/4, 5/4 and 9/7 add up to 2/1. In 12-edo, the aug chord is symmetrical, and it is its own homonym. But in 41edo, it's asymmetrical. Its homonyms are also augmented chords, but of a different type. Thus there are three augmented chords: upaug, downaug and down-halfaug. Logically, the last chord should be called down-doubledownsharp5 or down-double-up5, but those names are rather long. Instead it's named after its half-augmented 5th. This 5th is spelled as vv#5 rather than ^^5 so that the interval from the 3rd to the 5th is spelled as vM3 not ^3m3.

There is another trio of aug chords: up-halfaug, upminor-halfaug and up-sesquiaug, all homonyms. Their innate comma is the Zozoyo comma, which equates the octave with 9/7 plus 9/7 plus 6/5. Thus one 3rd is quite smaller than the other two. Only the uphalfaug is clearly an augmented chord. Since the 3rd is upped, the chord's 5th is spelled as ^^5 not vv#5. The upminor-halfaug chord's lowest 3rd is this small 3rd, and it really can't be called an augmented chord. The up-sesquiaug chord has ^^#5, a sesqui-augmented 5th ("sesqui-" means one-and-a-half). This is equivalent to a downmajor 6th, and again, it's debatable if this is really an augmented chord. In close voicing it uses every 3rd note of the Bohlen-Pierce 13ED3 scale.

The cryptic plus-sign symbol for augmented can be replaced with the far more intuitive and obvious lower-case a.

In 12-edo, the dim7 chord is symmetrical, and is its own homonym. But in 41-edo, it has homonyms. The most plausible one has the 3rd becoming the new root to make a 6th chord. This is a chord with a minor 3rd, a dim 5th and a major 6th. Such a chord in 12edo is identical to a dim7 chord, but in 41edo it isn't. Extrapolating from the terms maj6 and min6 gives us its name, a dim6 chord. To convert an updim7 chord to an updim6 chord (or downdim7 to downdim6), raise the 7th by one edostep. Thus C updim7 is only one edostep away from C updim6, which is equivalent to ^A downdim7 chord. Therefore C updim7 and ^A downdim7 are fuzzy homonyms. As are ^Eb downdim6 and ^A downdim7. Fuzzy homonyms are rare. They only occur when a chord spans 5 or 6 frets, as these do.

To avoid negative fret numbers, the chords in the table start on the 6th fret. As with the triads, the cryptic superscripted-circle symbol for diminished can be replaced with the far more intuitive and obvious lower-case d.

At the beginning of this article, chords of prime-limit 11 or 13 were dismissed because "those chords have multiple intervals of high odd-limit." But when innate-comma chords are allowed, this no longer holds true. For example, the mid-5th can be interpreted as either 16/11 or 13/9. Each of the following chords contain this interval, but all the other intervals in the chord are at most odd-limit 5, 7 or 9, depending on the chord. The one exception is the vM7(~5) chord, odd-limit 15.

The most important chord with a mid 5th is the downup7 chord. When translating pre-20th-century music to the Kite Guitar, the 7-limit up7 and down7 chords often sound inappropriate. The two best 5-limit translations of the dom7 chord are the downadd7 chord and the downup7 chord. The latter is used in Kite's Greensleeves translation. The mid-5th appears as the interval from the 3rd up to the 7th. In a 5-limit context it is 36/25. It's equated to 16/11 by the Luyoyo comma, and to 13/9 by the Thoyoyo comma.

All these chords use commas that are tempered out in 41-edo:

On a 12edo guitar, a root-5 chord is a different shape than a root-6 chord, whereas on a Kite guitar, the shape is the same. Thus the terms root-5 and root-6 are less useful on the Kite guitar. But a very useful concept when arranging for a 6-string Kite guitar is tonic-4 vs. tonic-5 vs. tonic-6. This indicates which string the tonic appears on. For example, Kite's translation of "I Will Survive" in D is tonic-5, and his translation in ^Bb is tonic-6. On a 6-string, certain bass lines require the tonic to appear on certain strings. In 12-edo, the same concept applies, but tonic-4 is rare.

In the early 1960's, jazz guitarist Ralph Patt adopted an all-major-3rds tuning. He said it "makes the hard things easy and the easy things hard." Because of the reduced range, he used first a 7-string guitar, and later an 8-string guitar. He placed the dots on every other fret.

The chord shapes are very similar to the Kite guitar, see RalphPatt.com/Tune/Chords.html. After learning the Kite guitar, playing a 12-edo guitar tuned in 3rds is a very odd experience! From his website:

"Disadvantage of the major third tuning.

"It's not easy to play simple folk chords. They are quite difficult to play with this tuning. If all you want to do with the guitar is sing folk tunes, don't try this.

"Much of the classical guitar literature becomes difficult or impossible to play because of frequent use of open D and A strings. However, I found Bach and early lute music easier to play with this tuning. Jim DiSerio made my eight string classical guitar with a capo on the low Ab string, bringing it up to an A without affecting the tuning. That solved the problem of the "open" A string."