User:FloraC/There is not a third side of the river

From Xenharmonic Wiki
< User:FloraC
Jump to navigation Jump to search

Donald Sauter, an advocate for octalism, made this famous verse: "humans are essentially binary beings."[1] Apparently, I have refuted it in Ingression, the earlier essay where I shared my takes on radicology and related issues. It remains true, though, that binary opposition is the principal form of categorical perception.

"There is not a third side of the river" is the analogy that hopefully helps to apprehend the context, which is extremely important whenever bringing up the topic of binary systems. One is either on this side of the river, or on the other side. Obviously, the reader may argue, one can be in the river. Actually, that case cannot be expected, since the probablity of being in the river as one is thrown into the world is zero. The reason is simple. The ideal river, that is, a boundary, contains no substance, and even if it does contain something, it is infinitesimal compared to either side of the river. That captures the essence of any binary system.

It is tempting to postulate that the continuum of real numbers comprises three distinct types: the positive, the negative, and the zero. However, we can see the zero is not to be regarded as on an equal footing as the positive or the negative because it is degenerate. In this case, zero is on the boundary. It is also possible to contruct binary systems whose boundary literally does not contain anything, or there is not even a concrete boundary.

This concept is straightforward. If binary functions P and Q satisfies this analytical distinction:

we may say this binary pair has parity, and we may say P is even and Q is odd.

Parity is the analytical struture of positivity and negativity, and is significant because it partly answers how signs can morph into tyranny. For example, the pair of presence and absence clearly demonstrates parity, as

Some believe the parity of presence and absence can be swapped. It has an appeal, even though the semantic coherence is doubtful.

Still, we may notice that everyday binary pairs can be connoted with parity, like life vs death. Widely believed, life is the presence of being, and death is the absence of being. Meanwhile, we can also think of death as a stable state, and life as a changing state, and hence the parity of life vs death is quite variable.

The Pythagorean tuning shall be used as the frame of interval categorization. The justification is but clichéd, so I am skipping it.

The 12 equal temperament is the quintessential tuning of diatonic. It has, obviously, 12 explicit intervals up to octave equivalence. In the diatonic scheme, they are: minor second, major second, minor third, major third, perfect fourth, tritone, perfect fifth, minor sixth, major sixth, minor seventh, major seventh and octave. We may use a shorthand notation:

So the 12 equal temperament does indeed define 24 intervals, with respect to a given reference point. The key to make it a 12 equal temperament and not a 24 is as follows. Here is the taijitu, or the diagram of taiji. There is some yang in the domain of yin and some yin in the domain of yang, and they convert each other constantly. The 12 explicit intervals are regularly played, that is, present. When they are silent, they are absent, but they are regularly played. Traditionally, the 12 implicit intervals are not played at all, so always absent. However, they can be played, for the same reason why the 12 explicit intervals can be silent, and they should be played – but only sparingly – in order to reach an equilibrium. 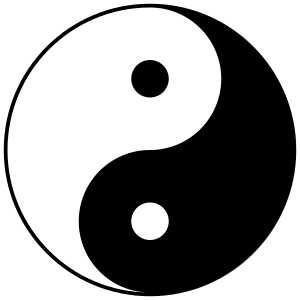 Harmonic dualism, nowadays reintroduced in the name of negative harmony, provides spectacular insight on how to approach tonality.

Clearly, the major key simulates the presence of overtone series. The just major triad – the fundamental building block of harmony – represents 1-3-5, which covers the first six harmonics when placed through octave transpostion, and can be extended to do more. Nothing is special here.

Then there is the minor key, an inferior second role that manifested itself as a supplement of major. The role unfolded through various facets. Minor was only spoken through the "grammar" of major. Minor entailed the harmonic/melodic minor scale, whereas major entailed the natural major scale. The lower dominant was called the subdominant, whereas the upper dominant was simply called the dominant. The D-T progression was considered "stronger" than the S-T progression. It was in the dominant key that fugues answered. It was to the dominant key that sonatas modulated.

So we see how the traditional music theory underrated the entirety of subdominant function and the entirety of the harmonic/melodic major scale. Should it be used to guide us to composition, all the possibilities were not empowered. Harmonic dualism fixed it excellently.

Observably, tonality is the quality of presence–absence, and is determined by the following arguments. First, what the audience presupposes as present, i.e. the expectation; next, the actual timbres played; finally, the intent of simulation which follows from the chord construction scheme.

Below is a table of permutations of all three elements and the resulted tonality. In the quality column, P denotes presence and A denotes absence.

Traditional music theory only explored case #1 since it viewed the minor tonality more as a modal variation than constructing chords downwards. In other words, it did not have full minor tonality. Harmonic dualism is advantageous as it encompasses the first two cases.

Be it harmonic or subharmonic, the timbre alone does not change the tonality. By playing subharmonic timbres, we step into case #3 and #4.

After that, come the unfamiliar lower four scenarios. The reason why they are unfamiliar is that changing the expectation is no easy. Most of us have been trained with harmonic timbres all the time. Most sounds in the real world tend to be harmonic (as opposed to subharmonic). There is not a dynamic to propel us to such a change. Hence, those four are likely to remain obscure in the future.

I use natural synonymously with simple. It agrees with academic usage, such as natural logarithm. It does not make sense if you think about it because logarithm, like all math, is man-made, but in this case it refers to the simplicity in the particular base where its differential has the unity coefficient, while for other bases there is a multiplier[4].

This work is licensed under the Creative Commons Attribution-ShareAlike 4.0 International License.