This page gives a general introduction to this concept; for a more mathematical take on this, see Meet and join.

"Merging" in this context refers to concatenating the matrices in question and then canonicalizing them.

The | ("pipe") symbol may be used to notate comma-merging, as in meantone|porcupine = 7. We could read this as "meantone or porcupine" or "meantone comma-merge porcupine is 7-ET". As a mnemonic, because commas are represented by vectors, which are vertical columns, when they merge together into matrices, the pipe resembles the seam between them as they merge.

The canonicalization step is important for eliminating any redundancies that may have been introduced by merging related temperaments, such as grade-deficiencies or enfactoring.

Sometimes when temperaments are merged, grade-deficiencies may occur. For example, comma-merging septimal meantone and miracle temperaments:

Note that we've only put it into Hermite normal form; we've done this to illustrate that one of the vectors is now entirely zeros (highlighted in red). This means that the matrix was nullity-deficient, or in layperson's terms, contained redundant commas. In other words, these two temperaments tempered out some of the same commas, and so when we merged them, even though the input temperaments required 2 vectors each to represent, their merged result doesn't require all 4 vectors; it can be completely represented using only 3.

Once we fully canonicalize, though, the all-zero row(s) are removed, and we end up with:

Sometimes when temperaments are merged, enfactoring may occur. For example:

which is a 2-enfactored meantone mapping, and it reveals the greatest factor as the GCD of the second row. But if we fully canonicalize it (defactor, and put into normal form), then we get:

which is simply the canonical mapping for meantone temperament.

By some definitions of the & operator, the defactoring part of canonicalization is not included — for example on Graham Breed's temperament finding tool. This allows for things like 5&19 to represent 2-enfactored meantone, rather than meantone itself. Instead of a full canonicalization, then, this definition merely puts the result into normal form and removes any all-zero rows or columns resulting from grade-deficiencies.

Every temperament mapping has a dual comma basis, and every comma basis has a dual mapping. Because of this duality, a special parallelism exists.

If we perform a map-merge, then look at the resultant mapping's comma basis, we'll find that it is the intersection of the input temperaments' comma bases. In other words, and like stated earlier, it includes only the commas that were in both of their comma bases.

Similarly, if we perform a comma-merge, then look at the resultant comma basis's mapping, we'll find that it is the intersection of the input temperaments' mappings, in a similar sense: it includes only the mapping-rows that were in both of their mappings.

In this sense, map-merging and comma-merging should be understood not truly as operations on matrices, but as operations on bases. Another way to describe these such intersections would be as bases for the linear dependence of the given temperaments, as described here: Linear dependence#For a given set of basis matrices, how to compute a basis for their linearly dependent vectors. 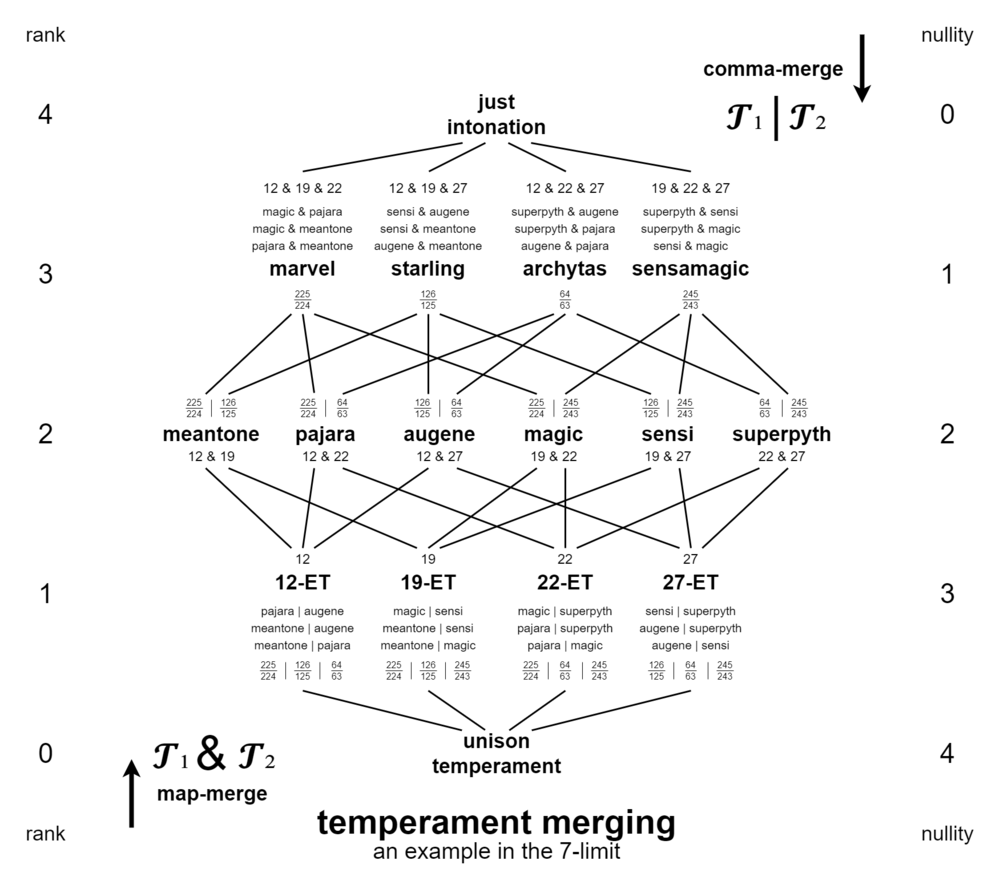 Vs. the wedge product

Temperament merging has been implemented as the functions mapMerge and commaMerge in the RTT library in Wolfram Language.