Assuming one is using one of the isomorphic all-3rds tuning, a Kite Guitar with 6 strings is a little limiting. 7 strings or even 8 is better. A slightly longer scale, say 27", is nice because it makes the frets less cramped. 12-edo 7- and 8-string guitars often have longer scales anyway, good if you're converting one.

Best to replace the entire fretboard, rather than removing the frets and putting new frets in the old fretboard. The 41-edo 5th is 702.5¢, so two frets will be only 2.5¢ away from the old ones, two will be 5¢ away, etc. So the old and new fret slots overlap, making conversion difficult.

One way to get an 8-string acoustic is to convert a 12-string guitar. The neck will be sufficiently strong and there will be enough tuners. There's fewer strings but more courses, so the new fretboard may need to be wider than the old one. The fretboard overhang can be filled with bondo to create a nice-feeling neck. Another possibility is to convert a 6-string classical nylon-string to 7 or 8 strings. The fingerboard is wide enough that it may suffice as is. The tension is low enough that an extra string or two won't break the guitar. The 3 holes on each side of the headstock that the tuner pegs go through can be filled and 4 new holes drilled.

In any given key, the Kite guitar has multiple "rainbow zones" on the neck. Assuming the tonic falls in the "sweet spot" between the 4th and 11th fret, it takes about 28 frets to provide 2 zones in every key, but it takes the full 41 frets to provide 3 zones. This 3rd zone increases the range the lead guitarist has to solo in by a 5th or so. The highest frets are very tight, but still playable melodically. Chording is very difficult.

The fret spacing is 1.7 times tighter than a 12-edo guitar. This chart compares it to the standard fret spacing. The spacing between the nut and the first fret is about the same as the space between the 12-edo 9th and 10th frets. Increasing the overall scale length will widen the spacing. 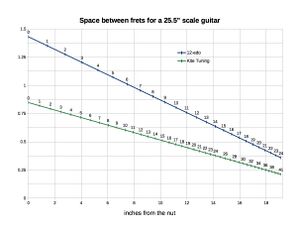 A 6-string Kite guitar tuned in 3rds can be strung with a standard set of strings, but it's not ideal. The high strings will be somewhat slack, and the low strings will be somewhat tight. To find the appropriate gauges, use the D'Addario method: calculate each string's tension from its unit weight, length and pitch (frequency) by the formula T = (UW x (2 x L x F)2) / 386.4. For open strings, the length is the guitar's scale. The frequency in hertz of the Nth string of 8 strings tuned in the standard downmajor 3rds with a low string of vD is 440 * (2 ^ (-7/12 + (21 - 13*N) / 41)). For a 6-string guitar in mid-6 tuning, N ranges from 2 to 7. Or use the frequency table below. The unit weight is pounds per inch, and is a function of string gauge and string type (plain vs. wound, etc.). D'Addario has published their unit weights, thus the individual tensions can be calculated for a given set of strings. One can work backwards from this and select string gauges/types that give uniform tensions using this spreadsheet: http://tallkite.com/misc_files/StringTensionCalculator.ods The desired tension depends on the instrument, and of course personal taste. A steel-string acoustic guitar might have 25-30 lbs. tension for each string. A 12edo 25.5" electric guitar strung with a standard 10-46 set has 15-20 lbs. With a 9-42 set it has 13-16 lbs.

Microtonalist and luthier Tom WInspear can provide custom string sets at his website www.winspearinstrumental.com. His approach is to extrapolate from familiar string sets. He says this about string gauges: "Gauges can be scaled at the same ratios as frequency. A 41-edo downmajor 3rd is 2^(13/41) = 1.2458, thus from string to string the gauge changes by 24.58%. But you can't do that across the plain to wound transition. To tune to different keys, increase the gauges by 5.95% for each 12-edo semitone of transposition, or 1.705% for each 41-edostep. All this assumes a 25.5" scale. For a scale of S inches, multiply each gauge by 25.5/S and round off. For scales longer than 25.5", err on the side of heavier and round up, as longer scales do feel more flexible loaded with the same tension. Likewise, for scales less than 25.5", err on the side of lighter and round down. However, the plain strings should always be rounded slightly down, and should utilize .0005" increment plain strings where available."

Method #1: To find the saddle compensation on a standard guitar, one compares the harmonic at the 12th fret with the fretted note at the 12th fret. For the Kite guitar, by a weird coincidence, one does the same! But the 12th fret now makes the 3rd harmonic, not the 2nd. Thus the two notes should be an octave apart, not a unison. If using a tuner, this is not a problem. But if using your ear, a unison is easier to hear than an octave. To get a unison, when you fret the string, play the 2nd harmonic with your other hand. With your forefinger or middle finger, touch the string midway between the 32nd and 33rd frets. Then stretch your hand and pluck with your thumb as close as you can get to the midpoint between your finger and the bridge. If this isn't feasible (e.g. with a bass guitar), you can capo the string at the 12th fret and use both hands to play the harmonic. And to be extremely precise, the fretted note should be 0.48¢ sharper than the harmonic. The 3rd harmonic is 701.96¢ and the 41-edo interval is 702.44¢.

On a Kite guitar, the scaleLength/1731 formula still holds. But saddle compensation affects the 12th fret note only one and a half times as much as the open string note. (Because an octave is 2/1 and a fifth is 3/2.) Hence for each cent of sharpness, one must flatten by two cents. For example, suppose the 12th fret note is 2¢ sharp of the 3rd harmonic. It's supposed to be 0.48¢ sharp, so the actual sharpness is only 1.5¢. (In practice, if one's tuner isn't this accurate, one might simply round down a bit.) Move the saddle point back by twice this, 3¢ or 0.045". This will flatten the open string by 3¢ and the 12th fret note by 4.5¢, narrowing the interval by 1.5¢ to an exact 41-edo 5th. On the saddle, mark a point 0.045" behind the exit point, and file up to the mark.

Method #2: The first method serves as a rough check of the saddle points. But it's much safer to check multiple frets. The cents table below (printable pdf here) has the pitch of every single note on the fretboard. The 2nd page of the pdf omits some redundant information to make room to pencil in discrepancies in cents. But the open strings aren't reliable, because the nut is not yet compensated (nut compensation must be done after saddle compensation). Use a capo to remove the nut issue. Capo the string at the 1st fret (or 2nd or 3rd, if the capo doesn't fit your 8-string very well). Tune the capo'ed string to the table, then compare the other frets to the table. Important: do not remove the capo during this process, as that will change the tension, and thus the pitch. It's usually sufficient to check every 4th fret, i.e. every dot. Look for the general trend. If the saddle point is too far back, the higher frets will be increasingly flat. Too far forward, and they will trend sharp. If there's an outlier that breaks the pattern, check its neighboring frets. No guitar is perfect. If some frets are sharp and some equally flat, that's the best you can get. Once you find the trend, estimate how much cents error would be expected at the 5th dot, which is almost an octave. That's roughly how many cents to compensate by. (To be super-precise, you could increase the cents by about 3%, so that 6¢ becomes 6.2¢.) Compensate as in method #1 with the scaleLength/1731 formula.

Nut compensation can be done similarly to a standard guitar, by comparing the open string to the fretted notes. But since the Kite guitar is so much more in tune, extra care might be taken here. One can shorten the fingerboard by around 0.030" (more if the nut action is high) to slightly overcompensate, then de-compensate empirically by filing the front of the nut to move the exit points back. One can determine the exact amount to file by finding the sharpness in cents with a tuner, then using the scaleLength/1731 formula. The front of the nut can be filed lengthwise to move all the exit points at once, or up and down to move individual exit points.

For more on saddle and nut compensation, see

Every note on the Kite Guitar fretboard. The outer columns show the dots on the fretboard. The low note is vD and the tuning is in downmajor 3rds. The note names in the table are 12-edo, not 41-edo. The low vD is written "D -29.3", meaning 12-edo D minus 29.3¢. The 41-edo names are here: File:The Kite Tuning 5.png

41-edo frequencies in Hertz. D is tuned to standard A-440 pitch.