Most of this page focuses on 15-EDO, perhaps the canonical Blacksmith tuning (and near to the POTE tuning), but much of it is also useful for Blacksmith temperament in general, even if played in other Blacksmith-supported equal temperaments.

Important features of Blacksmith[10] in 15edo 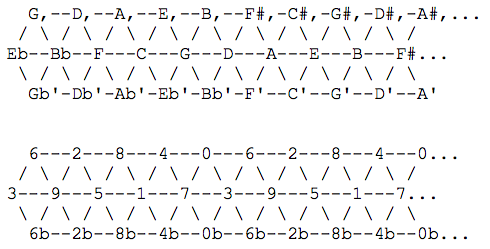 All of the familiar triads and tetrads of the diatonic scale are found plentifully in Blacksmith[10], which is pretty obvious when you just look at the notes available in the major and minor modes:

Looking at this table, one can see approximations to all sorts of functional chords; if it's not immediately obvious, I'll spell it out in the following tables:

Because 15edo is not a meantone temperament, and thus does not temper out the syntonic comma of 81/80, the usual 5L2s diatonic scale is not available. In fact, in 15edo the syntonic comma, which is normally only 21.51 cents, is tuned quite wide: it is mapped to one step of 15edo, and is thus 80 cents! However, one can approximate the diatonic scale (or rather, approximate the various untempered 5-limit JI versions of it) using 3 step-sizes—a large whole tone of 240 cents representing 9/8, a small whole tone of 160 cents representing 10/9, and a semitone of 80 cents representing 16/15. Since these non-MOS diatonic scales do not temper out the syntonic comma, they will only have at most five consonant 5-limit triads (unless an 8th note is included in the right place). They may have even fewer, depending on how the steps are permuted (for instance, if the step-pattern 240-240-80-240-160-160-80 is used, only two consonant 5-limit triads are available).

However, if one insists on using only the versions of the diatonic scale that have the maximum number of consonant triads available, then it turns out all of these scales will be 7-note subsets of Blacksmith[10]. They will also be the most compact arrangement of those five consonant triads possible on the 5-limit triangular lattice, which is just a fancy way of saying those five chords will be maximally connected to each other by common tones. This suggests that one can approach melody in Blacksmith[10] by treating it not as one 10-note scale, but as several related 7-note scales, each of which functions like a 5-limit untempered version of the diatonic scale.

This approach allows one to apply the usual principles of diatonic tonality and modality, with the caveat that each familiar mode of the diatonic scale will come in two flavors, depending which of the 7 notes one wants to build consonant triads on. The two flavors will share six notes in common, but one of the seven will differ by 81/80 (i.e. one step of 15edo). Interesting relationships do arise if one maintains the tonic but switches through its different modes (i.e. 1 mixolydian to 1 ionian to 1 lydian), and an "extra" mode appears, because of the fact that 256/243 is tempered out (a way to understand 256/243 vanishing in musical terms is that V/V/V/V = IV, unlike in meantone where V/V/V/V = iii). All together, there are 14 modes of the 7-note diatonic to be found in Blacksmith[10] if we keep the same tonic, and 20 if we allow alterations of the tonic.