As a further example, we might prefer only to use generators that are approximations of primes, so we'd like meantone's mapping in the form where the generators are an octave and a perfect twelfth, or tritave (3/1). This works for a similar reason: anything we could have reached with a perfect fifth we could also reach by moving up a tritave and down an octave, and that form looks like [⟨1 0 -4] ⟨0 1 4]⟩.

First trick: change one generator by the size of another generator

Let's demonstrate this trick on the most recent example we looked at: meantone as generated by an octave and a tritave. If we begin with meantone in canonical form, [⟨1 1 0] ⟨0 1 4]⟩, where the generators are an octave and a perfect fifth, then we know we need to increase the second generator by the size of the first generator, because a tritave is equal to a perfect fifth plus an octave. So in terms of our variables, we must change [math]g_2[/math] so that it's [math]g_2 + g_1[/math]. According to our trick, then, we must replace [math]𝒎_1[/math] with [math]𝒎_1' = 𝒎_1 - 𝒎_2[/math]. And so [math]𝒎_1'[/math] is found like this:

It may be counterintuitive at first that in order to change the size of a generator we must make a change to a mapping-row other than the one which corresponds to that generator (in this example, we changed the size of of the second generator by changing the first map). But there is a way to train our intuition on this effect. Think of it like transferring jobs. Remember that in order to know the size in cents of a generator, we cannot look exclusively at that generator's mapping-row out of context; we need to know the entire mapping, because the mapping-rows all work together to determine how the temperament works. Instead of "mapping-rows", let's call them "maps" for short. So we can think of every map like a workforce that outsources some of its work to the other maps; they're an interconnected system of workforces. And so when we subtract one map from another, we're in effect saying that the map being subtracted from is going to do less of the work of the map being subtracted. So when we subtract [math]𝒎_2[/math] from [math]𝒎_1[/math], what we're saying is that whatever work the first generator was doing for the second generator, it will no longer do that work anymore, so the second generator will need to take care of that work itself; and that's why [math]g_2[/math] becomes the size of [math]g_2[/math] plus [math]g_1[/math].

This generator complementing principle is not exclusive to the octave; it is fully generalizable, which is to say that we may replace any generator with its complement with any other generator, and we'll still be describing the same pitch system. Again, this is because any pitch we could have reached previously we can still reach, by moving by a combination of the new generator and the other generator we just changed its size by[1].

We can't accomplish this using the one trick we've already learned. How could we? That first trick relies on the interactions of two different generators, whereas negating a generator only involves one generator: itself. So here's where our second generator size manipulation trick comes in: negating a generator.

So at this point, the generators are an octave and a negative perfect fifth. It's time for our second step. 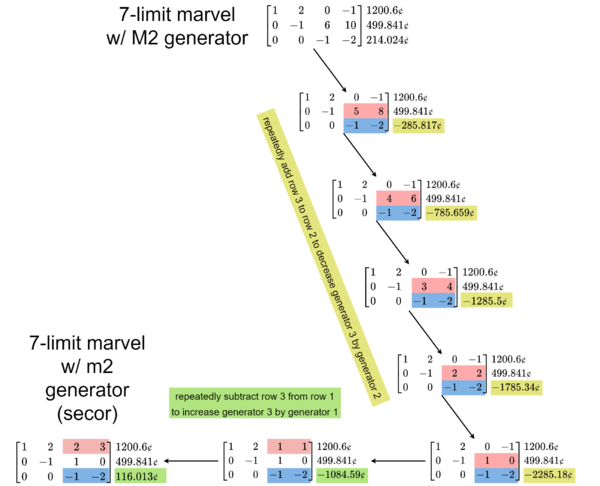 A demonstration of how one might transform the size of a generator of a rank-3 temperament.

These two tricks should enable us to attain any valid generator sizes we may wish for a given temperament. And these tricks work for any rank[3], not only rank 2 like we've looked at thus far with 5-limit meantone examples. To be clear, for a rank [math]r[/math] temperament, adding or subtracting [math]𝒎_a[/math] from another generator will only affect the size of [math]g_a[/math].

The fact that these tricks have isolated effects on the generator sizes like this makes it straightforward to compose sequences of them, applied one after the other, to attain an incredible variety of valid generator sizes, as you can see in the diagram to the right.

Using these two tricks, you do not have to worry about enfactoring the mapping, i.e. introducing a common factor in one of the maps. This is because neither of these tricks ever involve replacing a map with a multiple of that map; we always replace a map with a combination of at least one each of two different maps, as in trick 1, or with the map negated, as in trick 2.

In order to define the size of the generators, you need to specify a tuning strategy. Though if you have two generators that are close enough that their size ranking depends on the tuning, then you probably have other problems. In any case, the tuning strategy that we'll be using here is T2, because it's decent enough and easy to compute.

The following table shows how to obtain minimal-generator form from various starting positions, by synthesizing the two generator size manipulation tricks explained in the previous section. In this table, the period [math]p[/math] is the first map [math]m_1[/math] in cents and the generator [math]g[/math] is the second map [math]m_2[/math] in cents. It uses the simple example of 5-limit meantone.

The below code essentially works through the input matrix [math]M[/math] two rows at a time, beginning with the first two rows. Each pair of rows is "fixed" so that the second row is less than half of the first row. The same set of changes and potential recursions as described in the table in the previous section is used for each pair of rows. When the sizes of the generators is computed, T2 tuning is used for its computational frugality and reasonableness.