Twin primes {5,7} and {17,19} represent a set of twin primes capable of being Crossbone'd, as both 17 - 5 = 12 and 19 - 7 = 12. Once a pair of permissible twin primes is composed, two temperaments are devised by taking each member of the lesser set and dividing it into x equi-distant intervals

Because Crossbone is, at heart, a system for deriving tunings, Crossbone'd sets are described by 'orders'.

Order is determined by the numerical indexing of valid prime sets suitable for Crossbone.

There is currently no conjecture detailing the total possible number of orderings. 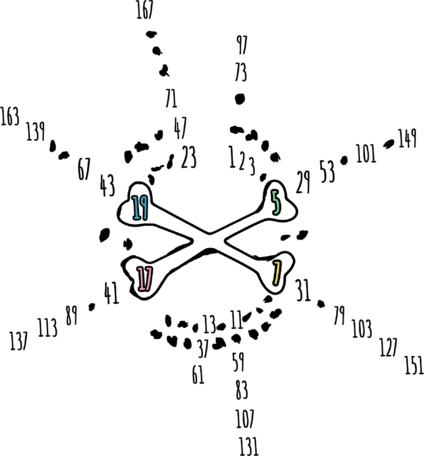 The first order of the Crossbone Tuning encompasses the first pair of twin pair of twin primes separated by 12, the set {5,7}|{17,19}.

The septave and pentave are not based around the octave, thus each individual septave and pentave will be completely unique and be found to approximate different intervals. Notice below that many of the intervals approximated happen to be harmonics! Those which are not harmonics happen to be readily usable just intervals no greater than 7-limit in the first sepent and 11-limit in the second sepent. (The sepent refers to the total keyspace represented by the pentave followed by the septave.)

One beautiful alignment of the 1st order of Crossbone is that it uses a combination of 17 and 19 tones. We notice that the standard 12-tone keyboard has 12 keys broken into a grouping of 5 notes and a grouping of 7 notes. This means that Crossbones tuning can be easily realized on any 'standard' keyboard, the first 5 7 5 grouping of keys representing the pentave, the second 7 5 7 grouping of keys representing the septave... spanning a total key range of 3 12-tone octaves, coinciding beautifully with the fact that the natural septave and pentave naturally occur between the 2nd and 3rd standard octave. Note that below, the intervals represented are octave-reduced, though the true harmonic range of the septave and pentave are true and preserved on the keyboard, representing the absolute pitch approximation I find to be much more intuitive in comparison to the octave-equivalent versions (ex. a twelfth being represented as 3/2 though sounding as a twelfth).

The Crossbone Lattice is a 4-dimensional lattice generated using the 5-limit, 7-limit, 17-limit, and 19-limit. By not including the 3-limit (but still implying the octave) and skipping over the 11 and 13 limits, we can arrive at very unique and interesting destinations. 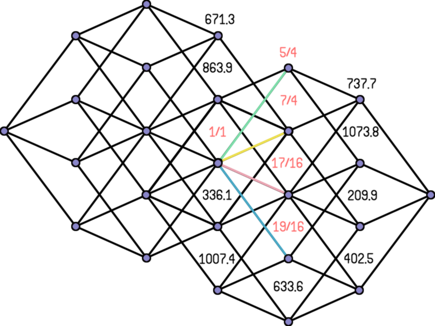 Because the lattice is octave-based and generated using the Crossbone primes, represented as harmonics, and doesn't enforce a relationship between them -as in Crossbone Temperament-, the relationship between the lattice and the temperament should be considered tangential, and the usage of the lattice considered novel. I personally use it simply to add 17 and 19 limit 'spice' to certain intervals generated using my 3rds and 7ths. Arriving at destinations by combination of 3rd and 7ths without piggybacking on the 5th I find to be very satisfying.

The Crossbone Scale is an octave-repeating simplified version of the Crossbone Temperament, forcing the intervals found within the sepent into a 12-tone octave-repeating scale. Within the first sepent, when one simply neglects including the harmonic approximations (and the 128/125 anamoly), he is left with 12 just 7-limit ratios between 1/1 and 2/1:

Because the scale is octave-repeating (though derived from the sepent), all sorts of 7-limit inversional fun can be had, and because it is 12-tone, it can be played on a standard keyboard.