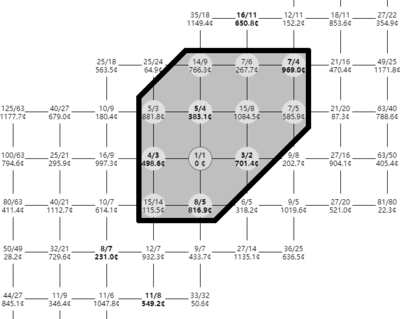 A convex set of 12 tones from the marvel lattice.

Todo: clarify, increase applicability
Is there maybe somebody who can explain this in plain English?

A simple, easy-to-understand definition of a "convex set" in a lattice is the intersection of the lattice with any convex region of continuous space. See below for a more formal definition.

The convex hull or convex closure of a scale is the smallest convex scale that contains it. See Gallery of Z-polygon transversals for many scales that are the convex closures of interesting sets of pitches.

The following definitions make sense in the context of any Z-module, which is the same concept as an abelian group.

where d_i = c_i/c. Note that while the coefficients d_i are allowed to be positive rational numbers (now summing to 1), b is still an integral vector, ie an n-tuple of integers.

A convex set (sometimes called a Z-polytope) in a lattice is a set that includes all convex combinations of its elements. The convex closure of a set of lattice elements is the smallest convex set containing the set.