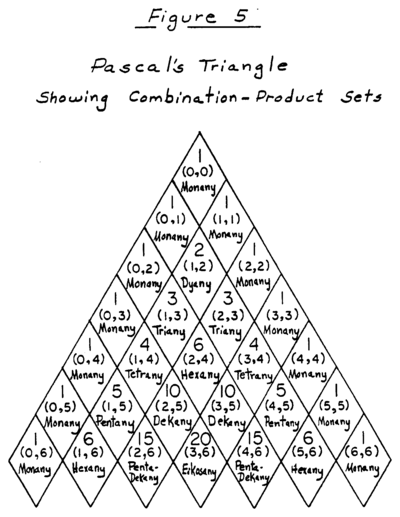 The names of all combination product sets up to 6 elements.

A combination product set (CPS) is a scale generated by the following means:

This is sometimes called a k)n CPS, where the n denotes the size of the set S. There are special names for special cases: a 2)4 CPS is called a hexany; both 2)5 and 3)5 CPS are called dekanies; both 2)6 and 4)6 CPS are called pentadekanies, a 3)6 CPS is called an eikosany, etc. These are normally considered in connection with just intonation, so that the starting set is a set of positive rational numbers, but nothing prevents consideration of the more general case.

CPS are closely related to Euler genera, since if we combine 0)n, 1)n, 2)n ... n)n before reducing to an octave, and then reduce, we get an Euler genus.

CPS were invented by Erv Wilson.