Referring not only to the 16-tone equal temperament, but also to half-equal and Lou Harrison's Just intonation 16 note scale, the natural octave division by Andrián Pertout and the 16-to-31 overtone scale, Armodue has been proposed as a new notation and theory system.

Desiring to make the approach to Armodue as easy as possible, but conscious that they had to give new names to the notes that constitute the system, the Italian creators of the Armodue system named them numbering from 1 to 9:

Consequently, the interval between a note at frequency n and other at frequency 2n is called a tenth or decave.

The basic semitone of Armodue, whatever concrete temperament is used, is always called eka (from Sanskrit eka: one, unit). In the chromatic Armodue scale, one eka always corresponds to the interval between any two consecutive notes.

For composing in Armodue it's useful to use a tetragram (staff with 4 lines):

If for the execution of a musical piece we need to write on two or more tetragrams, the notes will be written in the same way for every tetragram.

In other words, the "1" note will be written immediately under the first line in every tenth.

In Armodue we have only a numeric clef, that shows us the tenth:

So, in the illustrated example above, the first tetragram (from top) refers to the 3rd tenth (central tenth, corresponding to the octave C3-C4), the second tetragram to the 5th tenth and the third to the 2nd. If we need to write simultaneously on several staves, we will draw normal braces.

The keyboard conceived by the Armodue authors has the same disposition as Goldsmith's one (except the curvature): 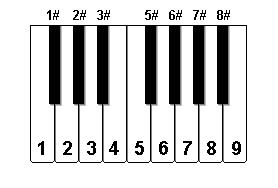 The white keys, corresponding to the notes without accidentals in the notation system, form again a Mavila superdiatonic scale (7L 2s).

The composer Andrián Pertout used a very similar scale in his composition "Sonus dulcis" (article on archive.org), namely the following (according to Armodue):