The frameshift comma is an unnoticeable 11-limit comma- specifically of the 2.3.11 subgroup- with a complicated ratio of 22876792454961/22866405883904, and a size of roughly 0.79 cents. It is the interval separating the Rastma from the Pythrabian comma, as well as the amount by which an octave-reduced stack of three 11/8 intervals falls short of a stack of four apotomes. Since both the Rastmic and Pythrabian temperaments are ways of conceptualizing how the 11-prime relates to the 3-prime within the 2.3.11 subgroup, that means that these two distinct frameworks for viewing the 11-prime relative to the 3-prime become linked when 22876792454961/22866405883904 is tempered out- hence the name "frameshift" comma. Naturally, tempering out this comma results in some form of frameshift microtemperament.

The name of the frameshift comma is even more appropriate in light of the fact that when one tempers out this comma, one can move stepwise to 11/8 though a series of four motions by the apotome and one motion by 128/121- all rather typical-sounding semitone-based motions- with this gesture forming the basis of what has since been dubbed the frameshift cadence- a cadence which shifts a listener's perception of pitch relations such that a modulation to 11/8 sounds in tune.

Sample of the Frameshift cadence as it appears in 159edo. 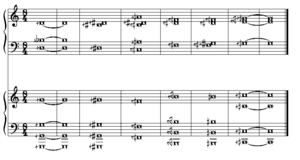 Score for the above sample of the Frameshift cadence in 159edo.