It is common practice to use the colon operator ":" for undirected interval ratios, and the slash operator "/" for directed pitch ratios. For example, "5/4" means something different than "4/5"; those are two different pitches. But "5:4" means the same thing as "4:5"; they are the same interval.

The undirected value is notated mathematically using horizontal bars above and below the value being undirected: [math]\color{red}{\overline{\underline{\color{black}{x}}}}[/math].

So, by referring to these two notations in these two different ways, the undirected value notation visually helps to convey how the operation itself bridges the concepts of absolute value and fraction bars. Taken together, this notation is designed to express its use for comparing values agnostic to their positions relative to the fraction bar.

The undirected value is formatted in this page using [math]\LaTeX[/math], but it can also be typed using Unicode characters, as x̲̅.

In situations where it is difficult to realize either the [math]\LaTeX[/math] or Unicode formats, and the function notation is not desired for some reason, an alternative mathematical notation is suggested: the value may be outfixed with colons, as in ":x:".

This alternative is designed to evoke the infix ":" operator which as previously described is the one typically used for undirected ratios.

In order for the undirected value to work on negative numbers as well, it is defined to take the absolute value of its input before checking if it is greater than 1.

In plain language, then, we can say that the undirected value of a real number is equal to itself if the absolute value of the number is greater than or equal to 1, or equal to its reciprocal otherwise. As a mathematical formula, we can express this as:

An alternative way to think about the undirected value is that it puts its input into ratio form [math]\frac{n}{d}[/math], and then if [math]d \gt n[/math], then [math]n[/math] and [math]d[/math] are flipped.

We still need it to work for negative numbers, though. The sign of a number in ratio form is not associated with its numerator any more or less than its denominator. So essentially we set aside the sign temporarily for the aforementioned process, then reintroduce it afterward.

As a formula, this has an advantage over the previously provided formula, in that it is expressible without the use of a conditional statement. However, this formula does not constitute a strict improvement, as it does have the notable disadvantage of requiring the use of several math functions: [math]\max[/math], [math]\min[/math], and [math]\text{sign}[/math]. Here is that formula:

To be clear, if the input is not already in ratio form, for example [math]\phi[/math], this formula requires it first to be placed over 1, like [math]\frac{\phi}{1}[/math].

A superunison number is a real number whose absolute value is greater than 1.

A subunison number, by extension, is a real number whose absolute value is less than 1.

The terms "superunison" and "subunison" may be shortened to "super" and "sub" when the context is clear.

The following identity shows the relationship between the undirected value and the absolute value, for positive real numbers. 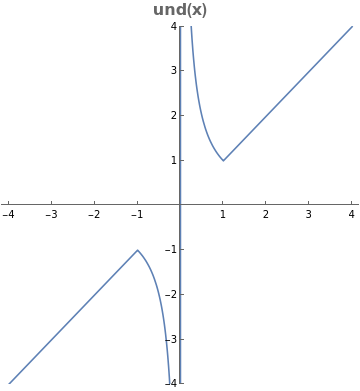 plot of the undirected value of x 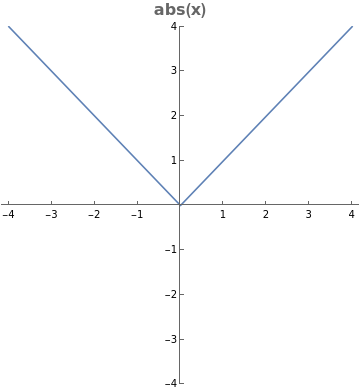 plot of the absolute value of x, for comparison

The terminology and notation on this page was developed by Dave Keenan and Douglas Blumeyer in 2020[1].