For an intervallic system with n divisions, EDL is considered as equal divisions of length by dividing string length to n equal divisions (so, we have n/2 divisions per octave). If the first division is L1 and the last, Ln, we have:

For example, by dividing string length to 12 equal divisions we have a series as: 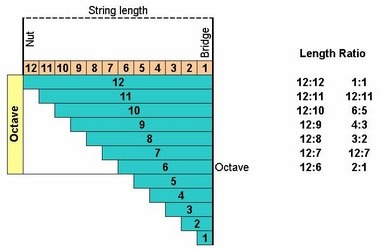 12:12 means 12 from 12 divisions, 12:11 means 11 from 12 divisions and so on. Ratios as 12:11 shows active string length for each degree, which is vibrating. EDL system shows ascending trend of divisions sizes due to its inner structure and if compared with EDO: 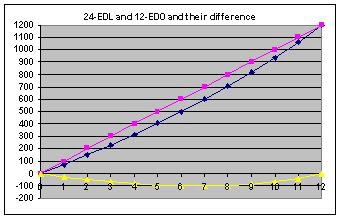 Relation between Utonality and EDL system

We can consider EDL system as Utonal system. Utonality is a term introduced by Harry Partch to describe chords whose notes are the "undertones" (divisors) of a given fixed tone.

In the other hand, a utonality is a collection of pitches which can be expressed in ratios that have the same numerators. For example, 7/4, 7/5, 7/6 form an utonality which 7 as numerator is called "Numerary nexus".

If a string is divided into equal parts, it will produce an utonality and so we have EDL system. EDL systems are classified as systems with unequal epimorios(Superparticular) divisions which show descending series with ascending sizes.