15 Equal Divisions of the Octave (15edo) is a tuning which divides the octave into 15 equally spaced pitches. It can be thought of as three sets of 5edo connected to each other by intervals of 3edo.

It is notable for being the next-smallest EDO after 12edo that contains recognizable major and minor triads, a property noted in the works of theorists like Ivor Darreg and Easley Blackwood Jr. However, it also lacks a traditional fifth-generated diatonic scale, so unlike similarly-sized EDOs like 17edo and 19edo, it is not directly backwards-compatible with traditional Western music theory.

Relative to 12edo, 15edo maintains some categorically-similar intervals, particularly the 3rds, 4ths, 5ths, and 6ths, but is quite different in the categories of 2nds and 7ths. The closest intervals it has to a 12edo whole-tone are both 40 cents sharp or flat of the 200-cent 12edo whole-tone. This makes it rather difficult to translate traditional diatonic melodic approaches into 15edo, and also means that things like 7th, 9th, and 11th chords will behave very differently, even though major and minor triads are still relatively familiar-sounding.

The fifth at 720 cents is quite wide, yet can still be functional as a perfect fifth by some standards. The perfect fifth of 15edo returns to the octave if stacked five times, which is radically different than what occurs in EDOs with fifths that are tuned closer to Just Intonation. This has a variety of ramifications for chord progressions based on functional harmony, because with a closed circle of five notes, the same interval can have multiple functions.

In the 15edo system, major thirds cannot be divided perfectly into two, while minor 3rds, 4ths, wide tritones, subminor 7ths, and supermajor 7ths can. Similarly, 4ths, 5ths, and subminor 7ths can all be divided into 3 equal parts, while minor 3rds, tritones, and major 6ths cannot. This gives 15edo a whole new set of pitch symmetries and modes of limited transposition.

Because 15edo's best fifth is the same as that of 5edo, the circle of fifths fully closes with only five notes, meaning the Pythagorean limma is tempered out. This slightly breaks traditional fifth-based notation, because E and F, as well as B and C, will merge into singular pitches. This also has the effect of making the Pythagorean apotome equal to the Pythagorean whole-tone, such that the sharp and flat accidentals will indicate raising or lowering by one step of 5edo, or 240 cents. There are two main approaches to dealing with this issue: the use of ups and downs in conjunction with the traditional A through G nominals based on the 5edo circle of fifths, and the use of Porcupine temperament instead of the circle of fifths as a notational basis.

In ups and downs notation, which is fifth-generated, every 15edo note has at least three names.

All 15edo chords can be named using ups and downs. Because many intervals have several names, many chords do too.

For a more complete list, see Ups and Downs Notation - Chord names in other EDOs.

15edo can also be notated using the natural generator, which is not the 9\15 5th but the 2\15 2nd. For 15edo, this is also known as porcupine notation. The 15edo porcupine genchain in both relative and absolute notation:

An alternative porcupine notation is based on the porcupine[8] LLLLLLLs scale using eight nominals α β χ δ ε φ γ η. Others have proposed ABCDEFGHA, but conflicts with European notation have caused many to reject this approach. Thus greek letters can be used in place with a close resemblance to the spelling of ABCDEFGHA.

15edo as a Regular Temperament

15edo may be treated as a regular temperament of 5-, 7-, and 11-limit JI, or as a 2.5.7.11 subgroup temperament. While it does significant damage to the ratios of 3, it offers significant improvement over 12edo in approximating ratios of 5, 7, and 11. As a 5-limit temperament, it is notable for being the smallest edo with recognizable, distinct representations of 5-odd limit intervals (3/2, 5/4, 6/5, and their octave inverses) that has a positive syntonic comma.

15-EDO offers some minor improvements over 12-TET in ratios of 5 (particularly in 6/5 and 5/3), and has a much better approximation to some ratios of 7 and 11, but its approximation to most ratios of 3 and 9 are rather off. Its mappings and error for various 11-limit subgroups is shown in the table below.

Using the 11-limit mapping from the table above leads to the intervals of 15edo representing 11-limit ratios as follows:

The following table shows how some prominent just intervals are represented in 15edo (ordered by absolute error).

Fugue a3 in 15ET by Aaron Andrew Hunt

Comets Over Flatland 12 by Randy Winchester

Comets Over Flatland 13 by Randy Winchester

Comets Over Flatland 16 by Randy Winchester

After Dark on the Pedway by Chris Vaisvil

Suite in 15-Note Equal Tuning, opus 33 by Easley Blackwood (as well as one of the Twelve Microtonal Etudes, opus 28)

15edo-Chords.ogg Some nice sounds I found in 15 EDO

Tocada in 15edo, by Claudi Meneghin

A Broken Stern (2012) by Andrew J Milne on SoundCloud 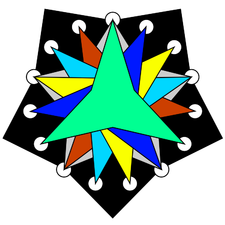 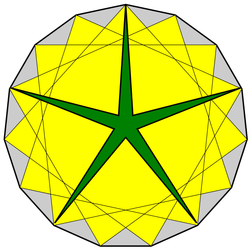 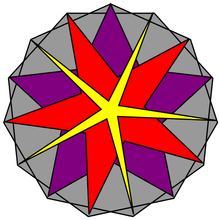